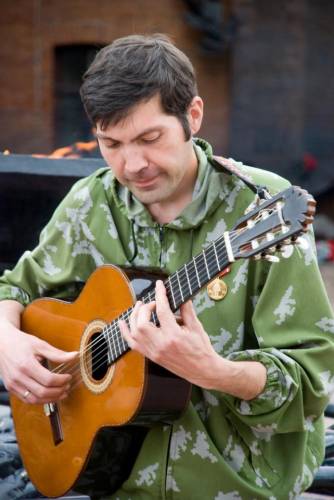 Contact Seller
Please note that you will need to sign in or register before you can contact this seller
Address:
Berik Bayzhanov
yl.Bagrianaia d.53
Barnaul
656065
Russian Federation

Berik Baizhanov is a brilliant guitarist a phenomenal musician. He is one of those whose art in favorable conditions becomes a precious gift for listeners, and for colleagues who were lucky enough to work with him. The natural talent of Berik Baizhanov is complemented by the special musician's "flair", which allows almost instantly absorb the elusive features of various manners and styles – and this sometimes takes many years for musicians! Perhaps it is this extraordinary sense of style combined with a rare ability to work and love his instrument that allowed Berik Baizhanov to become a leading soloist of the Russian chamber orchestra of Barnaul and one of the most famous and popular chamber performers in the region.

Berik Baizhanov was born in the city of Dzhambul (Kazakhstan). At the age of 16, Berik moved to Barnaul, Altai, to become a professional guitarist. He entered the Barnaul state College of music, a year later became the winner of the first prize of the regional competition "New names", and two years later, in 1993 – winner of II international festival of classical guitar in Novosibirsk. In the same year of 1993 saw the beginning of professional creative activity of Berik Baizhanov: he became an artist of the newly created Russian Chamber Orchestra. As part of this wonderful team Berik took part in all city cultural events, went on tour to Moscow and St. Petersburg, performed abroad (in Germany and China). It was in RCO that Berik Baizhanov was so useful with his natural qualities of a musician, and most of all – his natural character enriched with a sense of style and measure.

This talented musician’s guitar allowed RCO’s performances to come alive and capture the hearts of many viewers and listeners. It goes without saying how much guitar is loved is loved in Russia. It is hard to imagine an urban music or Russian romance without the sound of guitar strings. But Berik Baizhanov’s guitar is capable of being not only Russian: with the same ease it conquered Spanish classical music as well as Spanish Flamenco. Thanks to Berik Bizhanov listeners in Barnaul were able to get acquainted with gems of the guitar world like "Asturias" by I. Albenisa, "Concert Aranjuez" and "Fantasy for a gentleman" by H. Rodrigo, beautiful folk melodies of Spain in virtuoso concert arrangements.

Berik Baizhanov enjoys great respect from his colleagues and friends not only as a leading soloist of the orchestra, but also as a сreative arranger. His highly professional, well-thought-out arrangements, addressed to the creative possibilities of specific performers, constantly add to the Russian Chamber Orchestra repertoire. Experts note that the arrangements of Berik Baizhanov from year to year are becoming more vivid and creatively free.

“Berik Baizhanov – is naturally gifted, his work ethic is unbelievable. His grasp of the instrument is beautiful”

“Berik is a vastly gifted musician, it is obvious with naked eye. He is a wonderful arranger and instrumentalist. Serious, diverse – shortly speaking, musician from God”