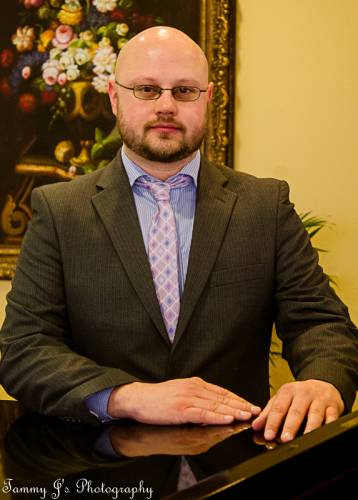 Jeremiah is currently a resident of Oklahoma City, Oklahoma, where he studies composition at Oklahoma City University with Dr. Edward Knight. He has been composing since 2001 and has amassed a body of work that incorporates many different styles and genre. Jeremiah specializes in pedagogical works for piano, choir, and chamber performances. Raised in a musical family, Jeremiah was constantly surrounded by various musical influences. He and his cousins were members of their local high school marching band, where he played trumpet. His grandfather was the lead guitar and vocals for a local country and western swing band and his grandmother sang soprano in their local church. In middle school Jeremiah would begin to play piano and continued through college. Jeremiah attended Oklahoma Baptist University where he earned a Bachelor of Arts in Music. At OBU he studied piano with Sandra Meyer and discovered his love of composition in an introduction class with Dr. James Vernon. In 2005 Jeremiah began studies at Southwestern Oklahoma State University in Weatherford, OK where he earned a Music Therapy degree. While at SWOSU he studied piano with Dr. James Breckenridge and composition with Dr. Dennis Widen. Jeremiah just recently received his Masters in Composition from Oklahoma City University.