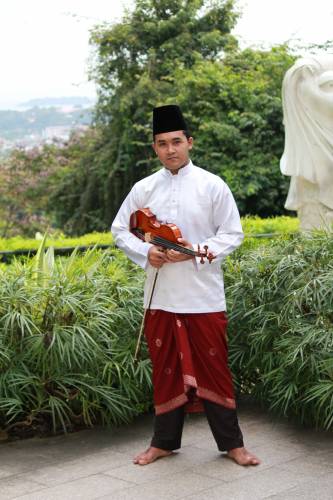 Mr Muhammad Firdaus Mohamad, Dip.LCM. His interest in music led him to a brief stint

at the Nanyang Academy

of Fine Arts where he was under the tutelage of Ms. Carolyn Sonderegger as an

oboist. He was guided in Band Directing at NIE under the tutelage of Prof. Ho, Dr Kelly Tang, Dr Eugene, Dr Chong and Prof Peter Stead. In 2011, Muhammad Firdaus attained the Diploma in conducting with Merit from the London College of Music.

He was commended by the Director of London College of Music, Professor John Howard

for displaying a good standard in his exams.

He is currently conducting the Orkestra Sri Temasek and Marsiling Malay Orchestra .

arranger and composer, he regularly writes for both of his orchestra for

performances and regularly performs on the accordian, flute and violin for traditional malay music.

Production and Pestariasi 2012 are some of the major events where he was theMusic Director, Composer and Arranger.

As a versatile instrumentalist, he has performed with various Traditional Malay

from Sri Warisan. Firdaus is also an external assessor

for the National Arts Council in evaluating traditional arts projects and part of the Malay Music Development Committee.