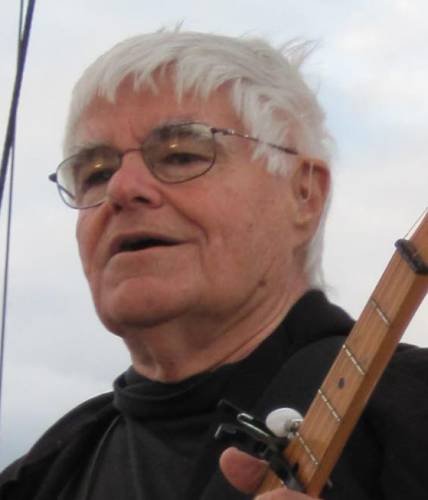 When the Episcopal diocese deconsecrated and bulldozed the Jersey City church where George was the rector he became a banjo folksinger/story-teller in Local 1000 of the American Federation of Musicians. He has performed in the Hancock County Jail, on Pete Seeger’s Hudson River sloop Clearwater, the barque Peking at Manhattan’s South Street Seaport, the New Bedford Whaling Museum, schools and libraries across the country, the Olympic Games in Atlanta and Sydney, above the Arctic Circle, in the Kalahari Desert, on Mt. Fuji in Japan, and most Tuesday nights in season leading sea chanties on the 151 foot four-masted schooner Margaret Todd sailing out of Bar Harbor. After seeing Lotte Lenya in the Three Penny Opera in 1956 he has been a lifelong fan of Kurt Weill. George produced, directed and sang in the Three Penny Cabaret: Rag-time Meets Mack the Knife a standing-room-only evening at St. Saviour’s Church in Bar Harbor in 2009 which raised $4000 for food and fuel donations on Mt. Desert Island where he lives in Maine. He was the Street Singer, Reverend Kimball, and the Queen’s Messenger in the 2010 New Surry Theatre production of the Three Penny Opera in Blue Hill, Maine.