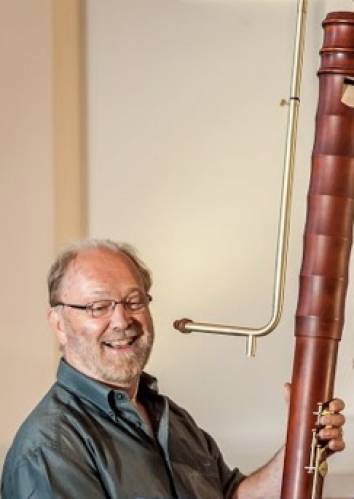 Many of David’s most recent compositions feature recorder, both as a solo instrument, as part of a group or recorder orchestra. But his musical career has been nothing if not varied. As a teenager, he sang & played guitar in a skiffle group, before Joining the R.A.F. as a clarinettist. Did I mention the Dixieland Jazz bands? Overseas postings brought him in contact with Greek, Turkish, Arabic and African music and his large collection of “non-Western” instruments quickly grew, as did his enthusiasm for cool jazz and bebop.

Next came Teacher Training College where he studied composition with George Self ( David Bedford’s teacher ) and Peter Dickenson whilst qualifying as a teacher. Apart from adventures into 20th century music, David also discovered and fell in love music from the Mediaeval and Renaissance Periods resulting in further additions to the collection of instruments.

By now double bass had emerged as David’s main instrument, and after leaving college his career reached a cross-roads … so he went in all four directions at the same time.

As part of a successful folk duo, David travelled all over Britain, Europe and parts of Africa. Much in demand as a session bass player, he also began to build a reputation as an arranger on recording sessions with folk greats like Paul Brady, Mick Malone, Alex Campbell, Sandy Denny (Fairport Convention), The Dubliners, John Martin, The McAlmans, Ralph McTell, Johnny Silvo etc.

Through his association with Johnny Silvo, David found himself in the studio of B.B.C. T.V’s programme for children, Playschool. His ability as a multi instrumentalist established him as a regular member of the team until the programme was cut in the mid 1970s. He was involved in writing and producing music for a number of other radio and television programmes for children.

As a result of the T.V. work, the teacher training and his enormous enthusiasm for so many different kinds of music, David and his current musical partner Friedemann Witecka started Tinderbox in 1972. Based on the premise that all music is equally valid, the two multi-instrumentalists presented programmes that combined folk, pop, art music and story telling from different historical periods and geographical locations, using authentic instruments as well as electronic sounds. During the next 20 years David, alone and with various other musical colleagues, performed workshops and concerts in schools, music clubs and concert halls all over Britain.

One of the Tinderbox collaborators, David Ramm, was head of music at Lewisham College in South London. In 1990, he finally persuaded David Moses to become a lecturer on the Popular Music course. Two years later David Ramm retired leaving David Moses to expand the department from 20 students to 150 plus per year.

But back to those crossroads in 1967. Road number 3 led David into the world of commercial pop and experimental rock music. Playing everything from bass guitar, sitar, bouzouki and singing down an amplified tenor recorder, he played and recorded in a number of groups and worked as a songwriter, arranger and musical director.

The 4th and most uninterrupted road sees David in his role as jazz double bassist. While jazz is by no means his only musical love, it is a musical genre with which he feels comfortable and at home. But like all good lovers, jazz never allows him to become complacent or bored. During his career, David has been fortunate enough to play with Stephan Grappelli, Herbie Hancock and many of the British greats such as Alan Barnes, Tubby Hayes, Don Rendell, John Surman, Bobby Wellyns.

The different strands of his career are drawn together through his work as composer and author. As a child David was making up songs before he got his first instrument (a ukelele). Throughout his career he has written music as and when it was needed. So the hundreds of songs for children were written for Tinderbox concerts & workshops, broadcasts or because a publisher had a particular theme in mind. These songs are all available on his website www.tinderboxmusic.co.uk, to browse or download.

The Recorder Boppers teaching packs came into being because David had a group of young recorder pupils with a very wide range of ability. David has written a book on classroom music for the publisher Schotts, a history of music for Piper books, had dozens of songs published, worked with Jane Sebba to produce the highly successful Recorder Magic series for A & C Black and written and published his own set of song books for children.

His first choral work was written for the memorial service of his father-in-law in 1998. Since then he has written several other pieces for performance by semi professional choirs in such venues as the Purcell Room on the South Bank of the Thames.

Recent works, which reflect his rediscovery of recorder as an expressive and dynamic instrument, include works for solo recorder plus piano, guitar and double bass, duets and ensemble pieces for between three and fourteen parts.