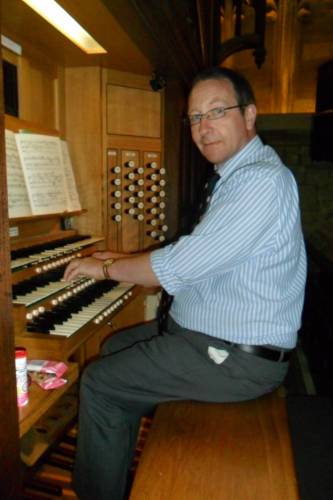 Harold Jackson was born in Scotland and reared and educated in Preston, Lancashire. He studied at the Birmingham Conservatoire under Dr. John Bishop & George Miles (organ), Joseph Weingarten (piano), graduating in 1980 with academic honours having researched into Baroque and French Classical performance practice and interpretation. Having spent a number of years as Assistant organist at Preston Minster, Lancashire, he was appointed Director of Music and Personal, Social & Religious Education at Chilton Cantelo School, Yeovil, Somerset and works as a free-lance concert organist and teacher. In 2010, he was promoted to Head of Humanities & Performing Arts.

Following the sad closure of Chilton Cantelo School in July, 2016, he has been appointed Honorary Assistant Organist at Sherborne Abbey, Dorset and Director of Music at St Peter's Parish Church, Shaftesbury, Dorset.

His recital career has included appearances at Salisbury and Liverpool Metropolitan and Anglican Cathedrals, St Patrick's Cathedral, Dublin and Sherborne Abbey, as well a number of highly successful appearances in France.

Aside from a busy performing and teaching schedule, he is working on a number of compositions and organ transcriptions.