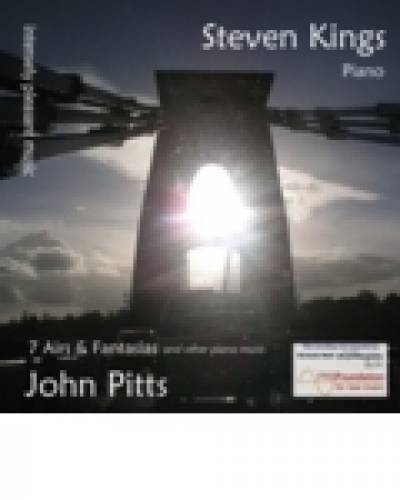 John Pitts is a composer, teacher, and author of the unusual 258-page book "How to Play Indian Sitar Raags on a Piano" (2016), followed by "Indian Raags for Piano Made Easy" (2018) for fledgling pianists. In 1994 he spent a year in Pakistan, which led to a number of chamber pieces heavily influenced by Indian classical music, including "Raag Gezellig", the piano duet composed for the Valberg International Piano 4 Hands Competition 2011.

He composes mostly music for piano – stylistically melodic, motoric, motif-driven, jazz-tinged, post-minimal impressionism – in recent years with a particular interest in various traditional world musics. His 2009 album "Intensely Pleasant Music: 7 Airs & Fantasias and other piano music", performed by Steven Kings, received “delicious” reviews (see below). His virtuosic pieces for two pianists "7 Piano Duets & Triets inspired by music from around the world" and "Gaelic Faram Jig in Kiev" (written for the Kiev Piano Duo)) have been performed at concerts, competitions and festivals in several European countries, plus Armenia, Australia, Russia, Ukraine and the USA, including in 2015 a concert dedicated to his music in Perpignan Conservatoire's Festival Prospective 22ème siècle.

John studied Music at Bristol and Manchester Universities, studying composition under Adrian Beaumont, Geoff Poole, John Casken and John Pickard, also receiving tuition from Raymond Warren and Robert Saxton, and briefly from Diana Burrell in a COMA scheme. "Typhus" and "Nuts & Bolts", two of his chamber pieces, were shortlisted by the Society for the Promotion of New Music. In 2003 John won the Philharmonia Orchestra Martin Musical Scholarship Fund Composition Prize, his Piano Quartet being performed by the Fidelio Quartet in the final stage of the competition at the Royal Festival Hall, and subsequently in Nottingham, London and Oxford.

He has written music for Christian worship, with two hymns on Naxos CDs recorded by his eldest brother composer Antony Pitts and TONUS PEREGRINUS, including one in Faber's The Naxos Book of Carols book. In 2006 Choir & Organ magazine commissioned "I will raise him up at the last day" for their new music series.

Order your copy NOW from www.johnpitts.co.uk/cds.htm or download from www.hyperion-records.co.uk/dc.asp?dc=D_1EMIPM08

MUSICWEB INTERNATIONAL “This is a colorful and interesting set by a talented composer…. The playing by Steven Kings is technically and emotionally perfect." Oleg Ledeniov

"Exciting stuff all round - vital, energising, but sensitive when need be. Toes - prepare to tap." Jonathan Woolf