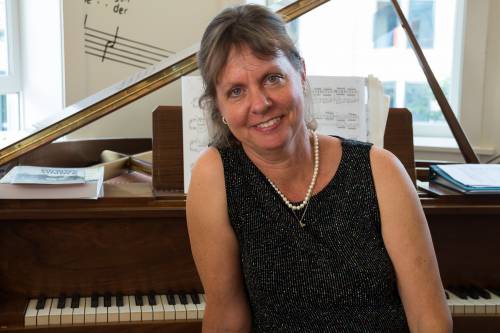 Julia Muench currently resides on the piano faculty at the Monmouth Conservatory of Music (now under the Count Basie Theatre umbrella) in Red Bank, New Jersey, with a large student class.

Her more recent musical activities besides composing, involve extensive piano teaching and giving piano recitals. The past two years, she has spent a good deal of time traveling in and out of the country. Italy and Chile have been among her destinations abroad. She performed a piano concert including her own composition, Nautilus Dances, as part of the Utopia Exhibit ( focusing on German Emigration to the US in the 1830's) in Washington DC's German Museum and at the Missouri history Museum in St. Louis, MO.

Her latest piano concert in Red Bank, NJ featured composers Chopin, Debussy and Khatchaturian. Many of her performances may be viewed on youtube under Julia Muench. She has her own musical article blog on Wordpress under musicflower.

She is a long time ASCAP member, where she was recently awarded and ASCAP writer's award for 2009/10. Julia has a MMA Degree from the University of Miami and has been composing since she was in her teens. She works regularly with ballet dancers at the Academy of Dance Arts in Tinton Falls, NJ.

Her earlier career activities include workshops and concerts for Eastern Connecticut State University in April 2008 for Hispanic Heritage Month, where she performed many of her own compositions and those of Turina and Jelly Roll Morton. In the Spring of 2007, she organized and performed a benefit concert toward raising funds for Safe Passage and the Children of Guatemala City. Her original compositions Seven Pieces for Piano were premiered on this program. Some of her original compositions for piano that have been performed live include: Prismatika for Piano (2006) choreographed by Mary Wagner, Folia Variations for Piano, Seven Pieces for Piano (2007): I. Nautilus II. Hanley's Theme, III. Waltz IV. Blue Bell Sway V. Noble Theme VI. Phasing and VII. Mirrors, Symmetry and 3 Guatemalan Folktunes arranged for Trumpet in Bb .. Her other writings include:: 32 Obscure & Exotic Scales and Chords for the Composer, as well as A Beginning Handbook of Obscure Scales from Around the World (with CD). Her book, Vistas I, Scenes from Nature, for piano is the result of over 20 years experience in teaching piano music. She also created and produced Moondance: a short dance & music film based on the Moonlight Sonata. She recently gave a program that included some of her original compositions Music for the Dance sponsored by the Middletown Public Library in New Jersey, on October 8th, 2008, and one previously at the Conservatory in Jan of 08. She also presented some of her compositions in January 2008 for the New Jersey Music Teachers Association in Mount Laurel, New Jersey.