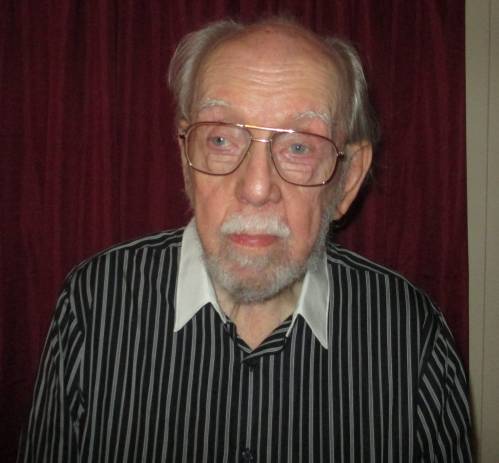 Musical efforts began at age 6, with the discovery that I could pick out a tune on the piano. My first teacher was my mother, who taught me piano. Cornet, and brass followed soon. Class prediction for me was an early appearance at Carnegie Hall. But an early diagnosis of Juvenile Rheumatoid Arthritis told me otherwise. Professional work was low key private affairs, wedding, receptions for special events, and plenty of time spent as organist. Not very obvious, but the big influences on my composition have been J. S. Bach, W. A. Mozart, David Guion, and Sun Ra's Vibraphonist, who also learned a bit from me! From their writings, not their musical works, and sometimes in an inverse sort of way, I include also Walter Piston, Paul Hindemith whose music I have never heard, Roger Sessions, Arnold Schoenberg, Ned Rorem, Deems Taylor, Leonard Bernstein,and Aaron Copland. My first arrangement was for a band. I somehow discovered that I was committed to providing 2 arrangements for use the following day. Bandmaster and I were both surprised that it was a success, considering I had no scores to start with, and no piano available to check my work. Currently, I compose surrounded by a forest of Redwoods and Madrone, and an easy drive to the Pacific Ocean. I am fond of the music of Tchaikowsky, Chopin, & Bach, but you would not discover this from my compositions!