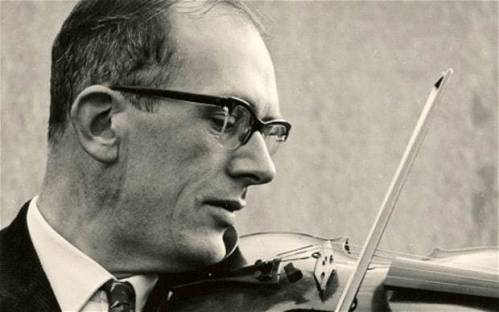 I am the son-in-law of the late Peter Mountain. Peter published two autobiographical books - "Scraping a Living" and "Further Scrapings". These can be ordered from Amazon or other internet sources, or from any bookshop. As a violinist Peter was a member of the Boyd Neel Orchestra, the original Philharmonia, for 11 years leader of the Royal Liverpool Philharmonic, 9 years Concertmaster of the BBC Training Orchestra and guest leader of many more orchestras. He played regularly in chamber music and as concerto soloist. He taught at the RAM London, and for 15 years was Head of Strings at the Royal Scottish Academy of Music and Drama in Glasgow. He coached many Youth Orchestras, including the NYO Great Britain and the NYO of Scotland. Awards include Fellowships of the RAM and the RSAMD, and Honorary Doctorate of Literature from the University of Bradford, in recognition of work in music education. He was chairman of the Scottish Society of Composers, and served on the Music Panel of the Scottish Arts Council. One of his last projects was presentation of standard items of violin repertoire in the form of Violin Duets, either for the use of violin teachers to accompany students, or as concert repertory for violinists.