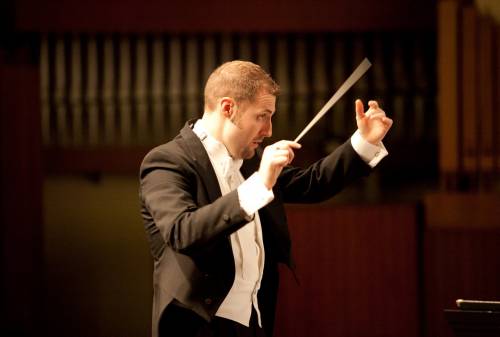 Born in Tucker, Georgia, Andrew Neer began his lifelong passion for music studying piano at the Yamaha School of Music in Indianapolis, IN at the age of five. After these beginning classes ended, he continued to study privately. In 1992 he was relocated, this time to Sterling Heights, MI. While there, Mr. Neer studied private piano, voice, and trumpet. At the age of fourteen he began to write simple melodies and harmonies to lyrics written by his father. He was active in his High School's bands (concert/jazz), choir, and theatre (musical/dramatic) departments earning high recognition in each respect.

Graduating High School in the year 2000, he attended Central Michigan University (CMU) to study Trumpet but soon changed to Music Theatre Performance and briefly to Vocal Performance. In his time at CMU, he had the privilege of studying with Dr. Eric Hoy Tucker (voice), Dr. Timothy Caldwell (voice), and Dr. Dennis Horton (trumpet). Realizing that he had more credit with the Music Theatre program, he shifted back to music theatre in order to graduate in a more timely manner. Though his main focus was on performance and singing, he continued to write throughout his undergraduate work at CMU. In addition to his private instrument instructors, Mr. Neer had the honor of working with composers Scott R. Harding, Jose-Luis Ma�rtua, and David R. Gillingham.

Mr. Neer always sets high goals for himself in everything he does accepting nothing but perfection. His career began with a great undertaking writing a spectacle in honor of those lost in the United States Civil War The Battle Grounds for Symphonic Wind Ensemble. Since then, this composer has written original music for several theatrical productions including a short ballet (A Mother�s Love) and underscoring for several shows (ex. Moliere�s Tartuffe). He has been honored to write music for critically acclaimed performers Dr. Eric Hoy Tucker (Southern Salute) and Dr. Alexandra Mascolo-David. While at Central Michigan University, Mr. Neer was honored to join Phi Mu Alpha Sinfonia, The Society of Composers International and ASCAP.

Mr. Neer has recently obtained his Master of Music in Composition/Theory from Wayne State University in Detroit, Michigan. At Wayne he had the pleasure of working under the compositional tutaledge of the talented Dr. James Hartway. In addition, he is currently working toward a second concentration in Conducting. Neer has a passion for many mediums of music. In his lifetime, he hopes to accomplish one or more of the following: write an Opera, Musical, and scoring for Film and Television.