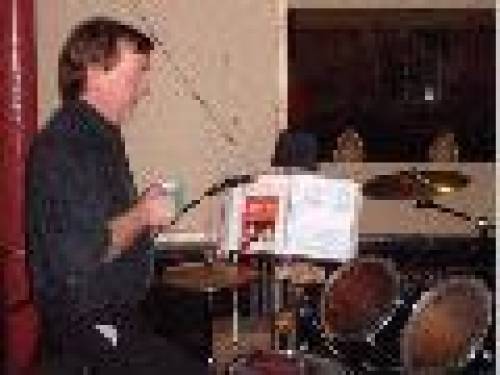 A Song-Writer of many years experience, I have composed in many varied genres, from radio jingles, through 'Pop' songs to incidental music for a video comissioned by one of the national Charities.I have also written 2 musicals, both freely adapted from Shakespeare plays: 'A Musical Midsummer Night's Dream' and 'Orlando & Rosalind'(adapted from As You Like It). First of these premiered in my current home town in October 1992 by a local Youth Theatre Group. For more information about either of these two shows email me at the address shown.I currently work as a freelance peripatetic tutor teaching drums and guitar both privately and around various schools in S. Cumbria, as well as acting as Musical Director for two local Amateur Dramatic Societies. Musical influences are many and varied: Gilbert & Sullivan, J.S. Bach, Ravel, Lennon/McCartney to name just a few.

Uncategorised music
(Music is the) Driving Force (Rock Band version)
(Music is the) Driving Force
(What is the) Password (to Your Loving?)
25 Years
Ain't That Always the Way?
Break in the Pipeline
Can't Stop Me Thinking 'bout You
Chasing Shadows
China Fever/Asian Flu
ChromaFunk
Curtain Raiser
Drum Groove Backing: Samba #1
Everyone’s in Need of Love
Fairies at Work
Freeway Annie
Funkstramental #1
Guitar Etude #1
I Guarantee
I Happen to Believe
If I Find You
Just Another Love Song
Life Cycle: Significant Stages - Adolescence
Life Cycle: Significant Stages - Childhood
Life Cycle: Significant Stages - Conception
Living on a Tightrope
Lollipop Lady
Loneliness (is Something You Can’t Share)
Long Way From Over You
Love’s Just A Gamble
Manches Vertes and No. 27 Ballet Medley
Mischievous Fun
Night after Night
No.27
Oddly Enough
One More Night (without Your Loving)
Read between the Lines
Remember Me Gently
Same Old Moon
Somebody Like You
Somewhat Latin
Spellbound No 1: Overture
Spellbound No2: Behold!
Supersonic
The Height of the Tangle
The Passing of Time
The Peek-A-Boo
There's No Returning
There’s a Time (There’s a Place)
Things that Go Funk in the Night
Truncated Funk
Tweedledum and Tweedledee
United We’ll Fall (into Each Other’s Arms)
What Happens to the Beauty Queen?
When Love Dies (It's No Use Singing Sad Songs)
Who Can Say Why (We Fall in Love)?
Who Can Say Why (We Fall in Love)? Piano/Vocal
You're More than Just a Pretty Face
ScoreExchange.com is operated by ADAP Solutions Ltd. ©
Sell sheet music |
Terms | Privacy |
Contact us | Blog |
Advertise | Help