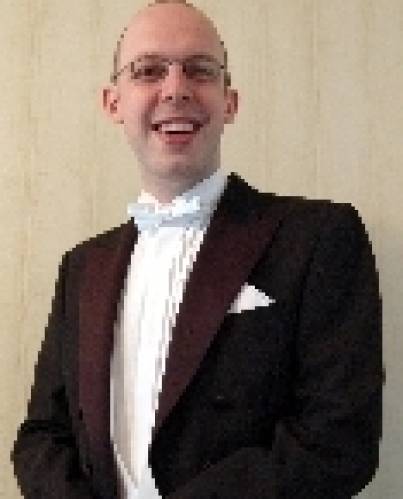 David has been involved in music ever since he can remember, having been taught to play piano and brass by his parents. He later studied with the Worcestershire Youth Music Service and occupied principal positions in all of their award-winning Youth ensembles; by summer 2000 he had a hat-trick of distinctions at ABRSM grade 8 (for euphonium, piano and music theory). Composing and arranging became David's first love however, and he was rewarded with a scholarship to Birmingham Conservatoire to study composition. Since leaving the Conservatoire, David has been busy working as a freelance composer, arranger, conductor and performer - as well as several on-stage appearances and stage management roles in student and semi-professional theatre. As a composer, David's career includes premieres of his music in Symphony Hall, Birmingham and at the Banff International Music Festival in Canada as well as a wide-ranging body of works for choir, brass band and theatre. His performing experience is eclectic, and includes musical theatre work, engagements as an accompanist for choirs and soloists (both vocal and instrumental), and appearances with orchestras, wind bands, brass bands and big bands; he is also much in demand as a conductor, speaker and workshop leader. David was awarded the DipABRSM (Performance) in 2002 and in 2008 completed his BA (Hons) with the Open University. David served as Director of Music at St. Mary & All Saints Church in Kidderminster until July 2012.