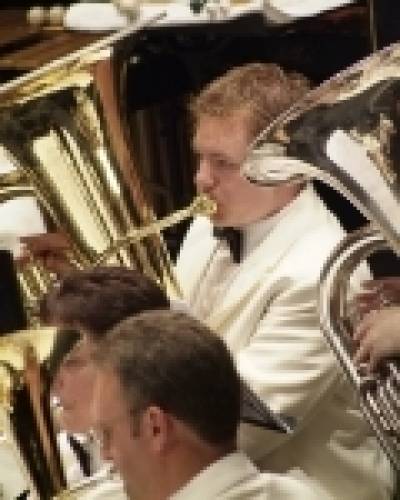 Contact Seller
Please note that you will need to sign in or register before you can contact this seller
Address:
Iain McKnight
15 Victoria Gardens
Kingsway South
Latchford
Warrington
WA4 1TH
United Kingdom

Iain was born in Reading in 1985, but grew up in St Austell, Cornwall. He commenced Cornet lessons at St. Austell Band aged eleven, and moved to Tuba the following year. In August 1997 he joined the St. Austell Youth Band and was invited to join the Championship section St. Austell Town Band in February 1999. Whilst living in Cornwall, Iain was also a member of the Cornwall Youth Orchestra, Cornwall Youth Brass Band, City of Truro Wind Orchestra, Carrick Wind Orchestra and the Fascinating Rhythm Dance Orchestra. He has also performed with the highly acclaimed Amadeus Orchestra.

On moving away to study in September 2003, Iain joined the East Yorkshire Motor Services Band and moved to the Leyland Band in April 2005, playing with the band on their historic 'nationals' win that October. During his time at Leyland, Iain has performed at the Royal Albert Hall in London and Symphony Hall, Birmingham, was part of the band’s first ever European Championship contest in Belfast, toured Switzerland to much acclaim, performed several times for BBC radio and television, recorded numerous CDs and given regular performances across the UK to many appreciative audiences.

In October 2006, Iain accepted an offer to become Musical Director of the Lostock Hall Memorial Band near Preston, later moving to direct the Flixton Band in August 2007, with whom he won the North West Counties Championships (2nd section) and Pontin’s Championships (3rd section). He also guided the band to promotion at the 2008 regional championships.

In 2001, Iain was the winner of the under-18 category of the National Association of Brass Band Conductors' Composition Contest, and in 2002 he won the J. F. Wills Memorial Cup for Brass Band arranging, in a contest organised by the Cornwall Brass Band Association. In May of that year, Iain was commissioned to write a ‘song of welcome' for the visit to Cornwall of HM Queen Elizabeth II in her Golden Jubilee year. Alongside numerous radio broadcasts, he has aso has his music recorded by St Austell Town Band (Nativity for Brass) and Leyland Band (By Arrangement, Arban Collection II and Matinee Magic).

Iain holds a Master’s degree in composition and a first class honours degree in Music from the University of Salford, where he specialised in conducting with Prof. David King and Nigel Weeks and composition with Prof. Peter Graham and Dr. Alan Williams. In 2005, he won the Elgar Howarth prize for composition and in 2006 was awarded the Lomas award for academic achievement as well as the Roy Newsome award for conducting. To date, Iain is the only person in the Music division’s 30-year history to have received three academic awards during their term of study. He is also a qualified music teacher, having received a PGCE from Manchester Metropolitan University in July 2008.

Iain currently works as a Music Tutor for Cheshire West & Chester and Cheshire East Music Services alongside his freelance teaching, conducting and composition work and is also a contributor to Brass Band World magazine.

Batchelor of Arts with 1st class honours in Music, University of Salford [July 2006]

Master of Arts with distinction in Compositional Studies, University of Salford [July 2008]