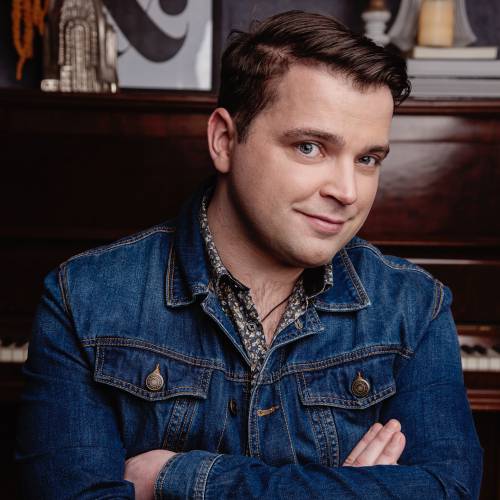 Jonathon Holmes is a songwriter, actor or pianist (whichever way the wind blows) from Sydney, Australia. His new musical comedy farce 'Three In The Bed' premiered at King Street Theatre, Newtown, September 2017; to sellout shows and rave reviews. His debut EP 'Plutonese' of quirky piano-pop produced by Matt Fell was released in 2014. But he is more commonly known as the guy with emojis on his face in the video of his angry jazz beat-poem 'Get Your Hands (Off Your F-ing Phone)'. His theatre roles include Berger in 'Hair'; Hewson/Downer in 'Keating!'; and director of 'The Fantasticks'. He is also the pianist for 'Mickey's Jazz Club', re-interpreting Disney songs (because he's still five in his head).

Reviews for his musical 'Three in the Bed'…

"[Three in the Bed] is silly and frequently filthy – and it’s very entertaining… Alongside Holmes’ catchy score and a funny book, the talented cast plays an integral role in ensuring Three in the Bed is a success… The laughs were loud and frequent, the audience well and truly on board… Musical theatre fans should check this out." - Theatre People

"Just when I thought musicals were going to disappear into pretentious self-drear, along comes a show that wakes us up and reminds us that there will always be a need for Rocky Horror… If you enjoy films like 40-Year-Old Virgin and Sausage Party then this is the show for you… But under the ribald surface is heart and intelligence, and all the songs are full of sharp wit and pathos." - Stage Whispers