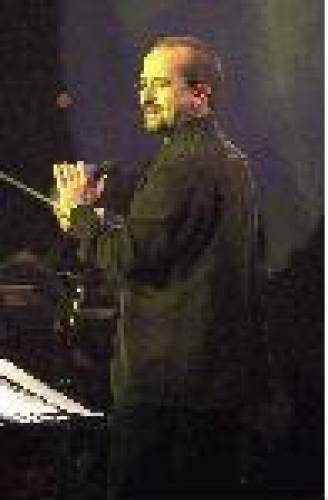 Experience as Musical Director for television includes three series of "O'r Grand" for S4C, a series of "Holi Hwn a Holi Llall", and most recently two series with Shan Cothi, involving studio sessions in London and Cardiff, arranging for and conducting ensembles ranging from classical orchestras to "Big Band". I have also acted as Musical Supervisor and Assistant Musical Director (specifically in charge of all orchestral arrangements and subsidiary conducting) for three series of "Codi'r To". In 1998 I acted as music supervisor for B.B.C. Wales on the production of "Peter Karrie Unmasked", working not only with Peter Karrie but arranging music for such internationally renowned studio guests as Sir Harry Secombe, Miss Joan Collins, and Larry Adler. Also in 1998 I was music supervisor for the S4C music series "Mardi Gras".

In 1999 I conducted the BBC Welsh NOW Orchestra in a millennium concert for Radio Cymru. I also wrote all the orchestral arrangements for the concert, the CD of which is currently available from Sain records. I have also been acting as M.D. for the BBC Wales series, "Money in the Bank", a music and chat show featuring such guests as Status Quo, David Essex and Dave Edmunds. The series has been recommissioned for the year 2000, and this year the guest list features Toyah Willcox and Leo Sayer.

In September 2000 I was invited to conduct the B.B.C, NOW Orchestra in a concert of Welsh popular music, which has been released as a CD. Also in September of that year I wrote the arrangements and conducted the rock ensemble for Bryn Terfel's "Dragon's Fire" concert, which was broadcast by S4C. In November 2000 I was invited to conduct the Danish Radio Orchestra in a concert in Copenhagen, and most recently I have been working with Larry Adler and Ceris Matthews on a televised duet. This is also to be performed in the Royal Albert Hall as part of the Duke of Edinburgh?s 80th birthday celebrations.

In the medium of television I have been commissioned to write several hundred transcriptions and arrangements ranging from small vocal ensembles to work for symphony orchestra, and I have written many signature tunes such as "Mor O Gan", "Datganiad", and "Holi Hwn a Holi Llall". In have also written all the music and conducted a large orchestra for the BAFTA Cymru Awards, and in 1998 wrote and produced the music for an S4C light drama series, "Licyris Olsorts". I have most recently been working on an album with the BBC NOW Orchestra , the third in a series of Welsh music, and I am currently working on an S4C chat show, featuring guests such as Bryn Terfel.

Among a wide range of my compositions there is a fifty minute dance suite for the West Glamorgan Youth Dance Company tour of Denmark, "Kubla Khan", based on the Coleridge poem; a version for orchestra, "Prelude Fugue and Chorale" from "Kubla Khan", toured the Principality with the Welsh Philharmonic Orchestra.

I have composed many items for the theatre, such as music for "The Railway Children", "The Canterbury Tales", "The Tempest", and many other occasional pieces. Music for a play "On the Tongue of a Bird" was published in March 1998.

For many years I conducted the University Chorale at the University of Swansea, undertaking concerts at the Brangwyn Hall and at the Taliesin Arts Centre.

Throughout the country I have performed, as soloist and with many groups, music ranging from Jazz through to Rock and Classical, as keyboard player, bass guitarist and vocalist.

I have also been a member of staff of the West Glamorgan Youth Theatre for 18 years, writing and devising music for many productions. I became a member of staff at Gorseinon Tertiary College in 1990 and have since created several large works for choir and orchestra, the latest of which is "The Dragons of Eden", a response to the writings of Carl Sagan. The work is scored for large mixed choir, solo mezzo soprano, orchestra and rock ensemble. This has been performed at the Brangwyn Hall Swansea and at the Grand Theatre Swansea.

In July 2001 I was invited to be the inaugural Musical Director of the National Youth Jazz Orchestra of Wales.

Over the past few years I have acted as MD for many television projects, including "Jones Jones Jones", a Welsh television extragavanza featuring Grace Jones, Gethin Jones, Dame Gwyneth Jones, and a 28 piece orchestra for which I wrote the sig tune and all the arrangements; a series called 'Noson Chis a Meinir', again writing the sig tune and all the arrangements; and recently I created a concert called the C Ffactor, featuring Catrin Finch, Only Men Aloud, Connie Fisher and Cerys Matthews.

In 2008 I was deeply honoured to be invited to act as Musical Director for a televised concert in memory of Welsh rugby legend Ray Gravell.

I am also a part time lecturer at Trinity College, Carmarthen, mainly teaching singing for actors, but also writing music for productions; among these are "The Women of Troy", "Animal Farm", and "Antigone".

Uncategorised music
All I Hear is Silence
Elegy (to a lost love)
Lisa Lan
Small Town People
So-Long, Larry
Song of the Green-clad Woman
Suo Gan
The Ballad of a Young Girl
The Other Side of the River
ScoreExchange.com is operated by ADAP Solutions Ltd. ©
Sell sheet music |
Terms | Privacy |
Contact us | Blog |
Advertise | Help