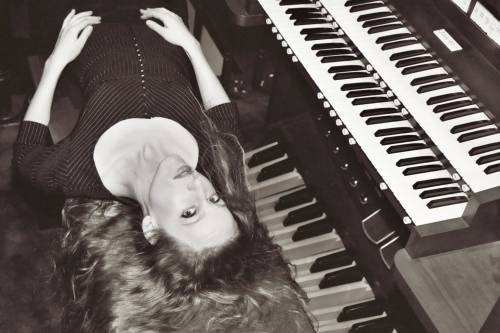 Kristen Lawrence was born and raised in the temperate trick-or-treating weather of Orange County, California. Disneyland's Haunted Mansion is her second home.

After studying piano for five years, Kristen began her organ studies at age 12 from Pulitzer Prize-nominated composer/organist Dr. Robert Cummings. She attended Foothill High School in North Tustin where she won the Philharmonic Society's Ed Doyle Music Award competition. She accepted a music scholarship to Brigham Young University, studying under organists Dr. Parley Belnap and Dr. Douglas Bush, where her experiences ranged from accompanying on the organ in front of audiences of 20,000 at televised live devotional broadcasts … to singing in the Early Music Ensemble … to performing as a can-can dancer in the university's production of "The Merry Widow."

She graduated from BYU with a Bachelor of Music in Organ Performance and Pedagogy and has taught students in both Orange County and Salt Lake City, Utah. As well as playing piano and organ for weddings, funerals, church services, Messiah sing-ins, banquets, and receptions, she also arranged and played keyboards in the pop/rock band Checkpoint Charley, recording one album with them.

In 2008 and 2011, Kristen performed on the $3.1 million William J. Gillespie concert organ in Pacific Symphony's Halloween Spooktacular under the direction of conductor Maxim Eshkenazy.

She currently has over 60 Halloween Carols written that she is arranging to record for future releases.