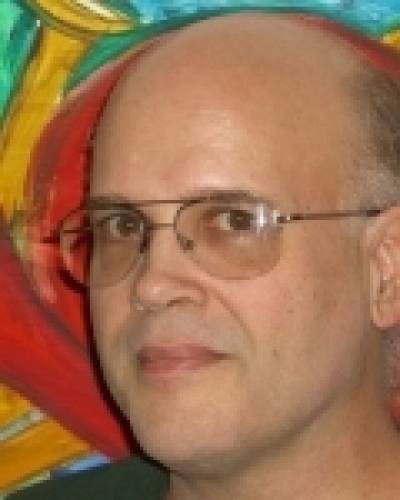 Mark Eliot Jacobs was born in 1960 in Mt. Pleasant, Iowa. In 1969 his family settled in Macomb, Illinois. He started composing shortly after starting piano lessons in the early 1970's. In 1982 he earned a BA in music at Western Illinois University in Macomb.

Mark moved to Chicago in the fall of that year where he attended the Graduate School of Music at Northwestern University. His studies there culminated with his Doctor of Music degree in composition in 1986. His composition teachers there included Steve Syverud, Ben Johnston (himself a student of Harry Partch), and Peter Gena.

From Fall 1987 to Spring 1991 Mark lived in Arcata, California where he served on the music faculty of Humboldt State University. There he taught applied trombone and electronic music. He also played trombone in the faculty brass ensemble (sometimes a quintet, sometimes a low brass trio).

Mark has lived in Medford, Oregon since 1991. He teaches music theory, composition, and low brass at Southern Oregon University in Ashland, Oregon where he plays in the Southern Oregon University Faculty Brass Quintet. In 2009, he is playing trombone in the Oregon Shakespeare Festival�s production of The Music Man. Mark is the principal trombone in the Rogue Valley Symphony and the Ashland City Band. Mark plays euphonium with the Rogue Tubas and also plays early low brass instruments such as the sackbut, the serpent, the english bass horn, and the ophicleide. Mark actively free-lances in the Rogue Valley on his various instruments. You can keep up with his activities at his web page: http://www.markjacobsmusic.com/