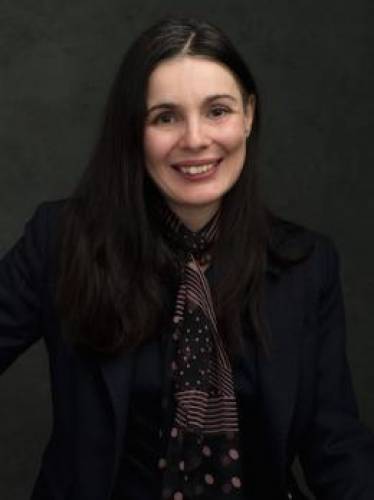 Polina Dimova holds a Ph.D. in Comparative Literature from the University of California, Berkeley and is currently an Assistant Professor of Russian at the University of Denver. She works on modern Russian, German, and English literature with an emphasis on the relations of literature to music, visual art, and science. Among her publications are articles on Sergei Prokofiev, Alexander Scriabin, Russian Symbolism, Evgenii Zamyatin, Oscar Wilde, and Richard Strauss, which appeared in the volumes Rethinking Prokofiev, Oxford University Press (2020); Hearing Texts, Ulbandus (2015); Shapes of Apocalypse, Academic Studies Press (2013); and Performing Salome, Revealing Stories, Ashgate (2013). Forthcoming with Penn State University Press, her book At the Crossroads of the Senses: The Synaesthetic Metaphor Across the Arts in European Modernism studies how Modernist multimedia experiments stemmed from a fascination with synaesthesia, the figurative or neurological mixing of the senses, for instance, in the perception sound as color. Her next book projects explore Scriabin’s Myth and Music in twentieth-century Russian culture and Cold War Fantasies in Soviet, East German, and Bulgarian magical realism and science fiction.

Before joining the University of Denver, Dimova taught courses on Literature and Music; Literature and the Visual Arts; Inter-Art Modernism; Literary Theory; and Translation Theory and Practice at Vandebrilt University, Oberlin College, and UC Berkeley. She has offered courses on Russian Culture and Civilization; Russian Modernist Utopias; Russian Science Fiction; Russian Fairy Tales, The Russian Novel; and all levels of Russian language, including seminars on such masterpieces as Mikhail Bulgakov's The Master and Margarita and Andrei Bely's Petersburg. Her courses provide creative and performing opportunities to all students and have included visits to the Allen Memorial Art Museum at Oberlin College and Oberlin Conservatory concerts.

Polina Dimova is a proficient violinist and a composer. She has studied violin with Philipp Naegele and composition with Ronald Perera, and was awarded The Settie Lehman Fatman Prize for the best composition in music at Smith College in 2000 and 2001. In 2000, she worked as an assistant librarian at the Marlboro Music Festival.