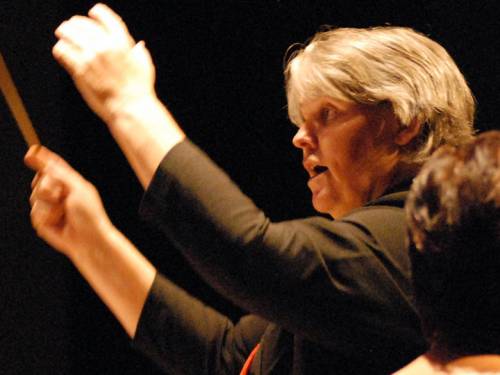 Dr. Sylvia Lee Mann is a composer, conductor and virtuoso performer, appearing with many orchestras in the Southern California area. In addition to her positions as Music Director and Conductor of the Southand Symphony, the West Covina and San Gabriel Valley Symphony Orchestras, she serves on the music faculty at the California State University at Dominguez Hills, where she is the Director of Orchestras, and teaches Conducting, String Pedagogy,Piano, String Ensembles, and Studio Strings. She the Pastor and Minister of Music at the Bethel Congregational Church, UCC in Ontario, California. She is a performer with The Chamber Orchestra of the South Bay, The Rio Hondo, La Mirada Symphony Orchestras, and is principal violist of the Culver City Symphony & Marina del Rey Symphony Orchestras.

She studied viola and violin with such notable teachers as Dr. Thomas G. Hall, Louis Debovsky, John Coppin, Noumi Fischer, Francis Tersi, David Stockhammer and Milton Thomas. As a composer, her mentors include William Kraft, Gunther Schuller and Samuel Adler. Her conducting studies included such notable pedagogues as Maestro John Koshak, who studied at the Mozarteum in Salzburg, Dr. James Vail of the University of Southern California, Daniel Lewis and Dr. Rodney Eichenberger.

From 1987 - 2002, Dr. Mann lived in Louisiana, where she served as the principal violist of the Shreveport Symphony Orchestra, The Baroque Artists of Shreveport and violist of the Premier String Quartet. She was the Music Director of the Ark-La-Tex Youth Symphony Orchestra program. She also enjoyed performing with the popular all-woman rock band Lip Service and was the recipient of the Shreveport LA Regional Arts Council's prestigious Music Fellowship Award.

Sylvia is currently composing, conducting and recording the music for an upcoming independent feature film. She has recently composed incidental music for a number of short festival films and theatre productions in the Los Angeles area, as well as multiple chamber music works and symphonic pieces for films. symphony orchestras, chamber music ensembles, and choral groups across the nation. Her original recorded music is now available at iTunes, Napster, Real Rhapsody, CDBaby, and a number of other digital music services. She also is a signed artist for DMX, Spafax and Face music - which program music for major cable television shows & music channels, as well as for major airline music selection channels. More information about her original compositions can be found on her website, http://sylvialeemann.com