Sign in / Register
HomeInstrumentationsOrchestraThe Music for the Royal Fireworks, HWV 351, I. Ouverture

The Music for the Royal Fireworks, HWV 351, I. Ouverture

By: Handel
For: Orchestra
This music is in your basket
View basket
Loading... 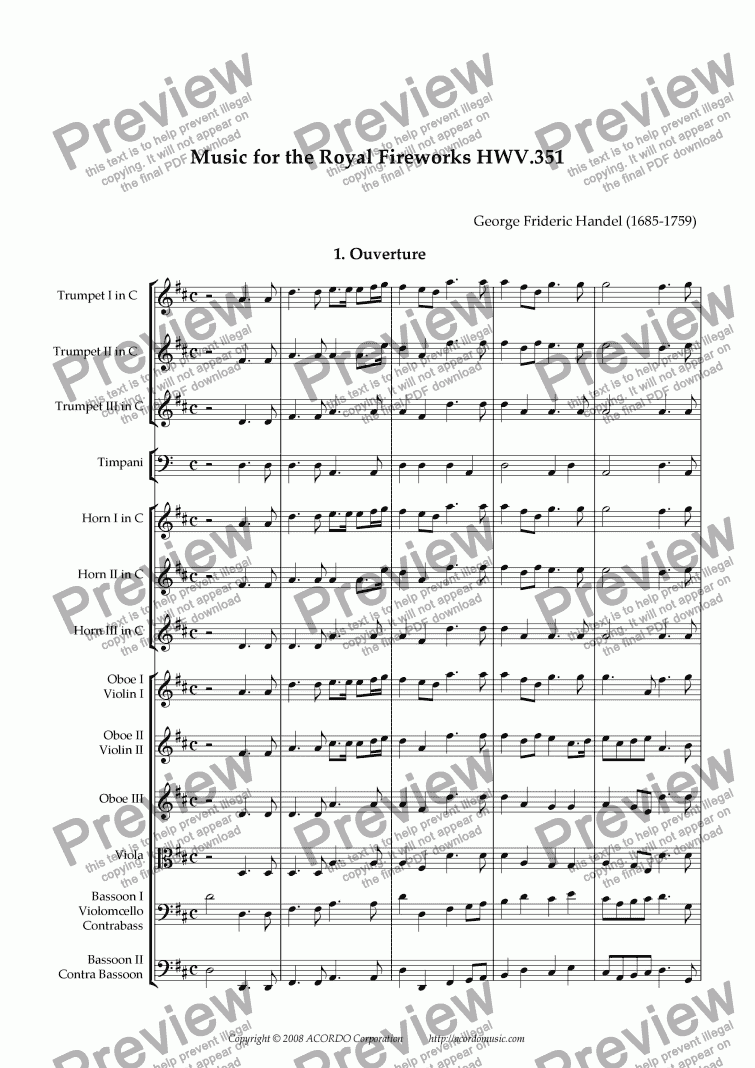 The Music for the Royal Fireworks, HWV 351, I. Ouverture

By: Handel
For: Orchestra

Composer
Handel
Publisher
ACORDO Sheet Music
Difficulty
Moderate (Grades 4-6)
Duration
8 minutes
Genre
Classical music
License details
For anything not permitted by the above licence then you should contact the publisher first to obtain permission.

The Music for the Royal Fireworks (HWV 351) was composed by George Frideric Handel (1685-1759) in 1749 for the fireworks in London's Green Park. It was to celebrate the end of the War of the Austrian Succession (1740-1748). The numbers of players were notified in the score of the overture as follows. -Trumpet I (3), Trumpet II (3), Trumpet III (3), -Timpani (3), -Horn I (3), Horn II (3), Horn III (3), -Oboe I (12), Oboe II (12), Oboe III (4), -Bassoon I (8), Bassoon II (4). Oboe I part is with Violin I, Oboe II with Violin II, Oboe III with Viola, Bassoon I with Violoncello and Contrabass, and Bassoon II with Contra Bassoon. It is said that George II of Great Britain's assignment was to use only wind instruments, however, Handel wanted to use strings. There are several different scores of the overture. It is supposed that the original scores were arranged by Handel himself. This score is based on Handel-Werkausgabe (1886) which was edited by Friedrich Chrysander (1826-1901). The Royal Fireworks consists of six movements; I. Ouverture, II. Bourree (without brass instruments), III. La Paix, IV. La Rejouissance, V. Menuet I (without brass instruments), VI. Menuet II. The brass parts in the score are written in C. The trumpet parts are written in C, Bb, D, A, and the Horn parts are written in C and F, for players convenience.

Chandos Anthem No.1 "O be joyful in the Lord" HWV246 Sonata

Reviews of The Music for the Royal Fireworks, HWV 351, I. Ouverture