By: Louis-Claude Daquin
For: String quartet
This music is in your basket
View basket
Loading... 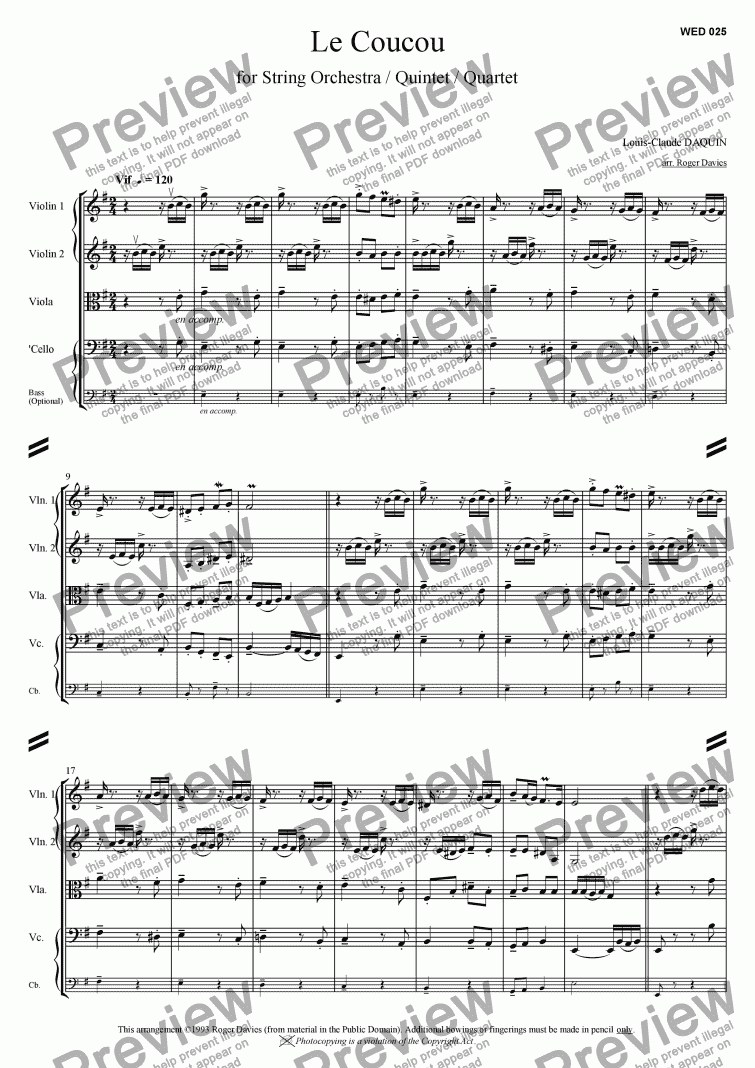 By: Louis-Claude Daquin
For: String quartet

Composer
Louis-Claude Daquin
Year of composition
1735
Arranger
Glynn Davies
Difficulty
Difficult (Grades 7+)
Duration
2 minutes
Genre
Classical music
License details
For anything not permitted by the above licence then you should contact the publisher first to obtain permission.

Eighteenth-century French composer Louis-Claude Daquin?s 1735 "Premier livre de pi?ces de clavecin" (Harpsichord Pieces, Book 1), remains something of a puzzle to modern musicologists. Daquin was a famous prodigy as a child, and as an adult he was spoken of in the same breath as Rameau and Dandrieu. Contemporaries recorded that Daquin rose to the pinnacle of craftsmanship as performer and composer, and Daquin eventually earned a high-profile royal appointment. But the Premier livre de pi?ces de clavecin, which is one of just two volumes of Daquin music that have survived, is, quite frankly, sewn of something less than the finest-grade musical silk. Perhaps, however, it was the very unpretentiousness of the dance-suites contained in the Premier livre, the general absence of sophisticated counterpoint (or at least what we would now call sophisticated?perhaps the implicit comparison with the harpsichord suites of Bach and Couperin is unfair, but it is also near-unavoidable when talking about harpsichord music from the 1720s and 30s) and the presence instead of simple, danceable rhythms and singable tunes, along with colorful semi-programmatic titles that made this music so appealing to Daquin?s public. Daquin was most famous for his improvisations, and this is just the sort of stuff that might, at one point, have been ad-libbed.

There are four suites in the Premier livre de pi?ces de clavecin: one in G major, one in D minor, one in E minor, and one in C minor/major. In each, Daquin throws typical dance-suite movements (allemande, courante, and so on) against less-traditional items with names like ?La Guittare? and ?Les Berg?res? [?The Shepherdesses?].