Sign in / Register
HomeInstrumentationsChoirThe Yellow Kid, the Latest and the Greatest

The Yellow Kid, the Latest and the Greatest

By: Tourjee, Homer
For: Choir
This music is in your basket
View basket
Loading... 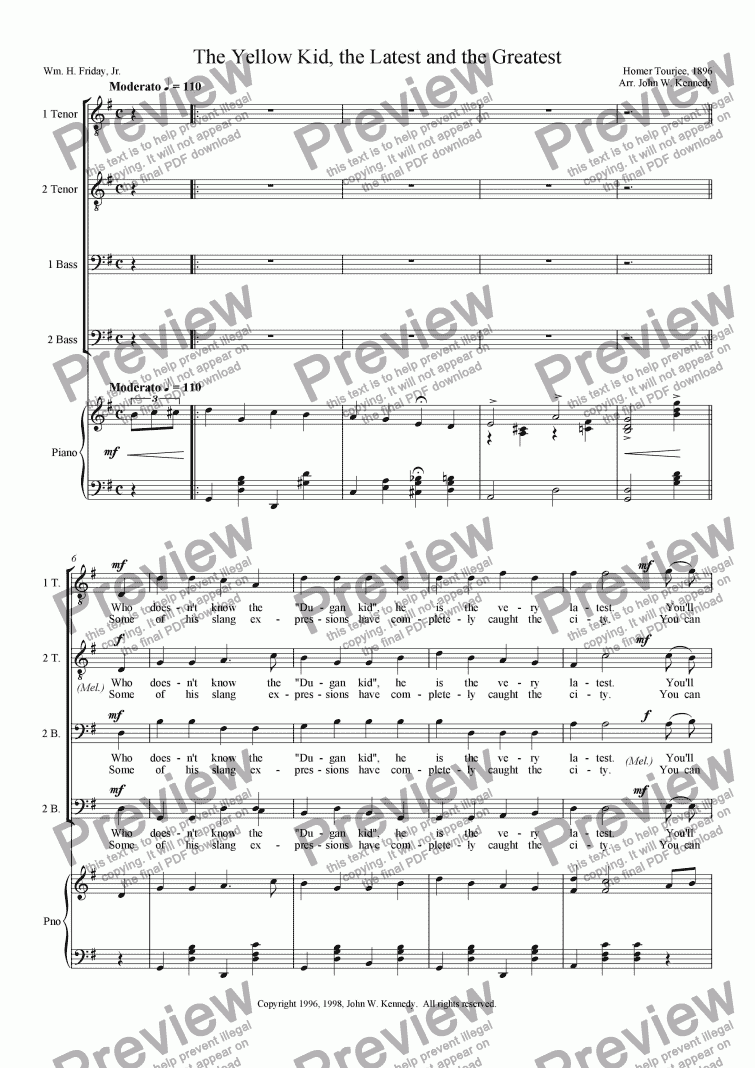 The Yellow Kid, the Latest and the Greatest

By: Tourjee, Homer
For: Choir

Composer
Tourjee, Homer
Year of composition
1896
Arranger
John W. Kennedy
Lyricist
Friday, William H., Jr.
Difficulty
Moderate (Grades 4-6)
Genre
Rock and Pop music
License details
For anything not permitted by the above licence then you should contact the publisher first to obtain permission.

January 5, 1896, the "New York World" presented a full-page color cartoon entitled, "Golf – the Great Society Sport as played in Hogan's Alley," featuring a barefoot, bald-headed gamin clad only in a yellow nightshirt; the Yellow Kid (or Mickey Dugan, as he was eventually to be baptized) became the hero of the world's first comic strip. A common comic image at the time was the life of "ethnic" children of urban poverty; it is not likely that such humor would be acceptable today; the nearest we can come, perhaps, is some of the "Our Gang" comedies. Richard Felton Outcault (1864-1928) was one cartoonist who made a specialty of this genre, with a comic vein that was all his own. His street urchins radiated defiance of penury, the Kid typically standing at the center of some riotous activity. In October, Outcault moved to the "New York Journal." The law at the time meant that neither the "World" nor Outcault had any proprietary rights in the feature, except for the title "Hogan's Alley", which belonged to the paper, so, from then on, there were two Yellow Kids, one drawn by Outcault for the "Journal," and one, drawn under the old title by another artist, for the "World." The Yellow Kid could be seen everywhere for a few years, in toys and advertising, on the vaudeville stage, and in sheet music. In particular, the Homer Tourjee Music Publishing Company of New York published this novelty song, at first called "The Dugan Kid Who Lives in Hogan's Alley." On November 8, 1896, the comic supplement to the "Journal" printed a somewhat altered version of the song, with words changed to fit the move to the "Journal", on which this arrangement is based.

Reviews of The Yellow Kid, the Latest and the Greatest

Sorry, there's no reviews of this score yet. Please .
In order to submit this score to ScoreExchange.com John W. Kennedy has declared that they own the copyright to this work in its entirety or that they have been granted permission from the copyright holder to use their work. If you believe that this score should be not available here because it infringes your or someone elses copyright, please report this score using the copyright abuse form.