MOZART - STARR; Andante in F major, KV 616, "The Flute Clock," for flute and piano (reduction of arrangement for flute solo and orchestra)

By: Wolfgang Amadeus Mozart
For: Solo Flute + piano
This music is in your basket
View basket
Loading... 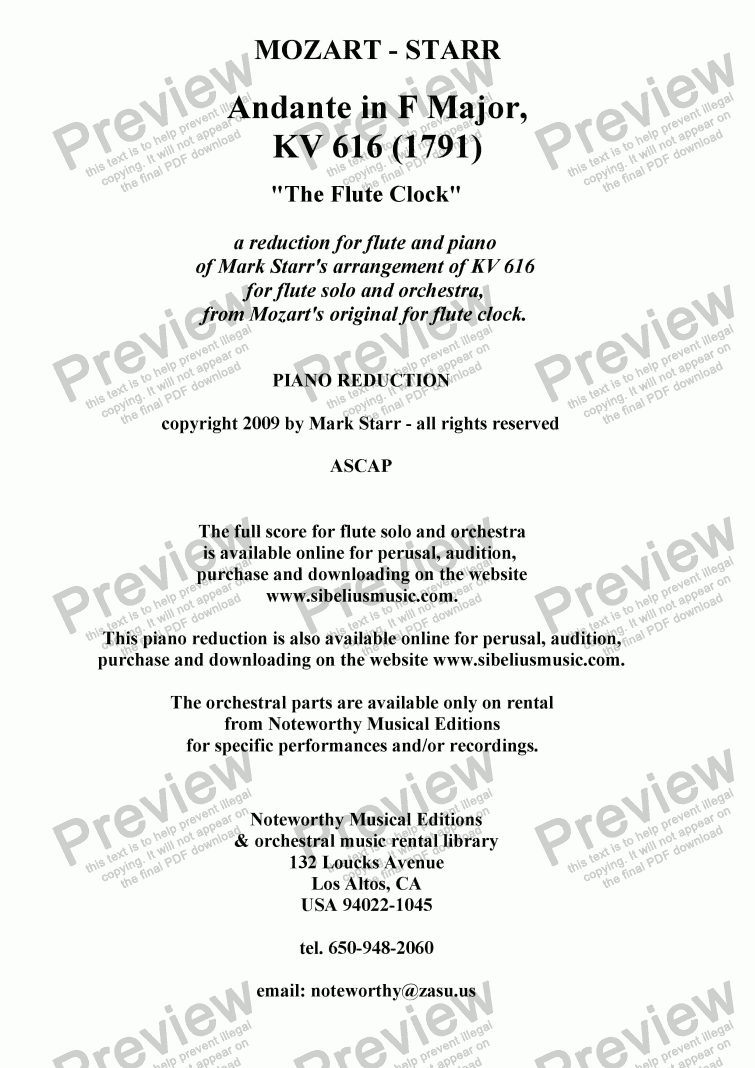 MOZART - STARR; Andante in F major, KV 616, "The Flute Clock," for flute and piano (reduction of arrangement for flute solo and orchestra)

In early 1791, Mozart was hard at work on "The Magic Flute." Only a few months earlier, he had composed, on commission from Count Deym, two magnificent fantasies for the mechanical organ at the Muller Exhibition Hall in Vienna. As described in a notice published in the Vienna Zeitung, which cited the mechanical performance of Mozart’s music, this wondrous instrument and Mozart’s extraordinary works were attracting considerable crowds to "the well-lighted establishment." Now, Mozart was an established recording artist! Thus, it is not surprising that he was sought out by a maker of flute clocks to compose yet another mechanical work, this time for incorporation into their delightful instruments.

Flute clocks were also mechanical organs that played music encoded with pins on a rotating cylinder - except these flute clocks were much smaller devices than Count Deym’s mechanical concert organ. The pipes in the flute clocks were so small that the instrument only descended to G below middle C, the lowest note on the violin, and it played at a much lower volume. Nevertheless, Mozart excelled himself yet again, and turned out a fabulous composition especially designed to be performed by a machine. This work differs greatly from the vast orchestral canvas of the two fantasies for mechanical organ. Mozart wrote it on three staffs, giving no idea of any musical instruments he had in mind. But clearly, the piece was designed as a solo for an instrument that covers the exact same range as the flute, accompanied by an ensemble (such as a small orchestra.) Moreover, this piece is late Mozart - about as late as one can get. Some months after composing this Andante, Mozart was dead.

I have arranged this music for flute and orchestra - the same small orchestra that Mozart used in many of his concertos, rondos and andantes. To do so, it was necessary to fill in Mozart’s incomplete harmonies, and expand the bass line to notes below G (a relatively easy task, since Mozart often doubled his bass lines at the octave.) Here we have a concert Andante of the highest musical quality. To perform it on the flute takes considerable virtuosity and style. The music is permeated with the same charming character of "The Magic Flute" (although all the themes are new.)

The orchestration gives flute soloists the opportunity of performing this splendid but little-known work together with orchestra.

This reduction for flute and piano of the orchestral score will enable flutists, if they so desire, to play this work on flute/piano recitals.

You can peruse this score with SCORCH as it plays the music with basic MIDI sounds. You can also listen to an MP3 of the music made with enhanced musical sounds. If you wish, you can download this MP3 recorded demo file free-of-charge for repeated listening.

I hope listeners will express their opinions about Mozart’s Andante in F Major, "The Flute Clock," and my arrangement for flute and orchestra - either with an online review, or in an email to me (just click on the button marked EMAIL THE PUBLISHER.) I am always interested in reading listeners’ comments about my compositions and orchestrations.

Reviews of MOZART - STARR; Andante in F major, KV 616, "The Flute Clock," for flute and piano (reduction of arrangement for flute solo and orchestra)