By: Gabriel Faure
For: Choir + orchestra
This music is in your basket
View basket
Loading... 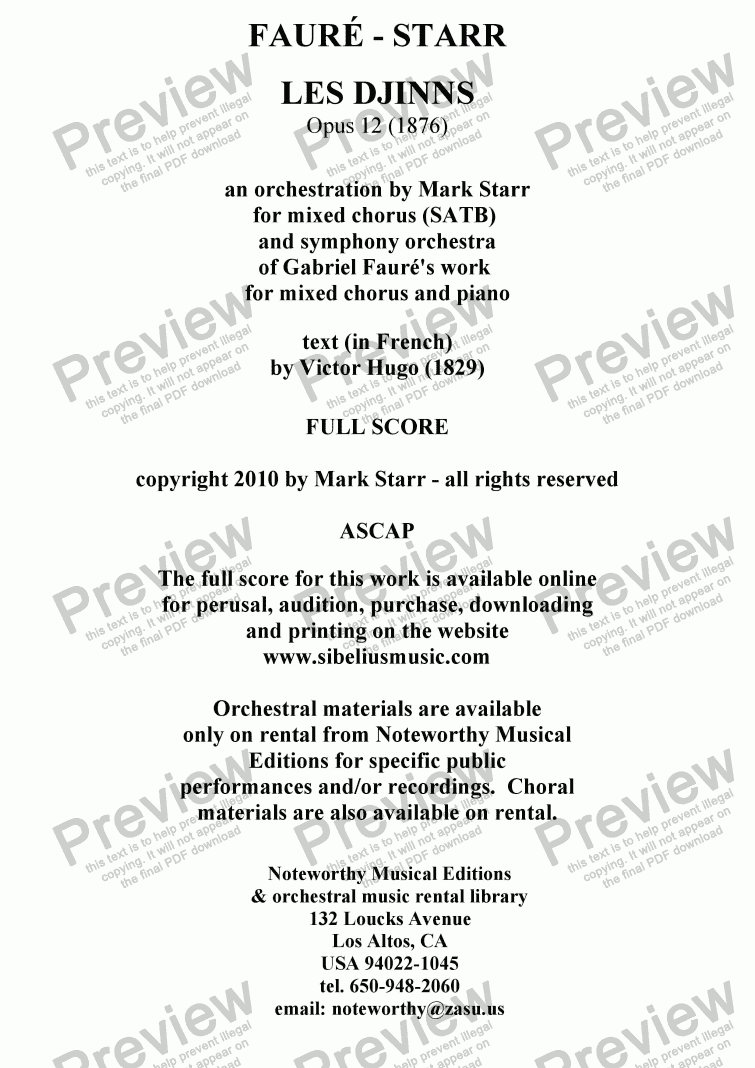 By: Gabriel Faure
For: Choir + orchestra

’Les Djinns’ is a macabre poem by Victor Hugo. When it was published in 1829 in Hugo’s collection of poems entitled ’Les Orientales,’ it shocked and thrilled France as few poems had ever done. Hugo was then 27 years old. ’Les Djinns’ helped quickly establish his reputation as France’s finest poet.

A djinn is a genie. In Islam, the djinns were supernatural beings created by Allah. Neither humans nor angels, they form a third class of sentient creatures who inhabit a parallel universe. The Djinns are mentioned frequently in the Koran. There is a Surah entitled Al-Jinn. The Djinns possess free will. Thus, they can be either good or evil.

However, there is no question what sort of creatures are described in Victor Hugo’s poem. The djinns are the incarnation of evil. They resemble the demons who, in Christian tradition, still roam the earth wreaking murder and mayhem. In the Bible, these demons are the descendants of the fallen angels who mated with human beings when they were expelled from Heaven, following Lucifer’s failed rebellion. In Islam, the rebellion against Allah was led by Iblis, a djinn.

Hugo’s poem inspired a major work for piano and orchestra by Cesar Franck, ’Les Djinns’ – which is still part of the standard orchestral repertoire. Many music listeners may be surprised to learn – as I was when I first came across this music – that Gabriel Fauré also composed a work entitled Les Djinns. Even more surprisingly for those who think of Fauré only as composer of ravishingly beautiful but delicate, emotionally-restrained melodies, this piece is a dramatic and exciting tour de force.

In 1876, Fauré composed and published this work for chorus and piano. Today, on the rare occasions when it is performed publically, it is usually played in this form.

Another orchestration exists – another one besides mine, that is. But, as far as I have been able to ascertain, this orchestration of the accompaniment was not made by the composer – and it is not published. I have heard it performed. In my opinion, it is colorless and does not realize at all the considerable dramatic possibilities inherent in Fauré’s complex, rich accompaniment. Hence, the raison d’etre for my orchestration – which I hope will induce modern-day symphony orchestras and choruses to program the work on their concerts.

’Les Djinns’ is a stunning grotesquerie in the vein of Mussorgsky’s ’Night on Bare Mountain,’ Berlioz’ ’Songe d’une nuit de Sabbat’, Mendelssohn’s ’Walpurgisnacht’ and Wagner’s ’Ride of the Valkyries.’ In my estimation, Fauré’s ’Les Djinns’ deserves a vivid orchestration, as colorful and dynamic as the other remarkable works in this distinguished company.

Reviews of FAURE - STARR; Les Djinns, for mixed chorus and symphony orchestra (orchestrated by Mark Starr from Faure’s original for chorus and piano)