Piano Quintet No.2: Darwin vs. Cremo 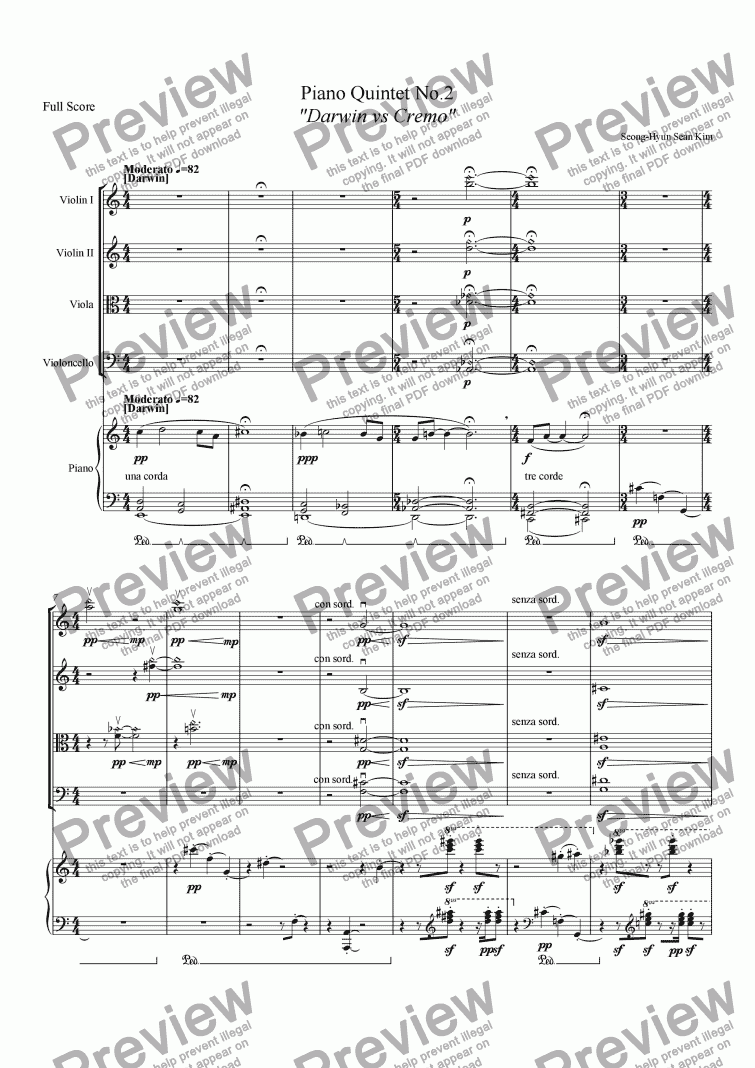 Piano Quintet No. 2: Darwin vs. Cremo is a discussion on the origins of life written in the British Parliamentary Debate Form. Darwin�s theory of Evolution, represented by the transformation of a Pentatonic scale through to an Octatonic scale using pitch split transformations, is contrasted by Cremo�s theory of Devolution, which is conversely represented by the transformations to Pentatonic, Whole Tone, and Octatonic scales employing Sean Kim�s compositional Technique of Interval Expansion and Compression. Through this debate the widely accepted theory of Evolution is challenged by a lesser known theory of Devolution, bringing to light new perspectives on not only where we came from, but also, perhaps more importantly, what we are. In a 2003 article, New Evidence Challenges Darwin�s Theory Best-selling Author Further Defies Evolutionist, Cremo�s theory is described as follows: �Cremo proposes that before we ask the question, "Where did human beings come from?� [We] should first contemplate, "What is a human being?" Cremo asserts that humans are a combination of matter, mind, and consciousness (or spirit). Human Devolution contains solid scientific evidence showing how a subtle mind element and a conscious self that can exist apart from the body have been systematically eliminated from mainstream science by a process of knowledge filtration. "Any time knowledge filtration takes place you can expect a great deal of resistance, criticism, and ridicule when it is exposed and challenged," says Cremo.�

In the final section of the debate, both sides conclude harmoniously on the facts that no one can deny: �Wherever we came from, we are here; whatever we are, we are.�

Reviews of Piano Quintet No.2: Darwin vs. Cremo