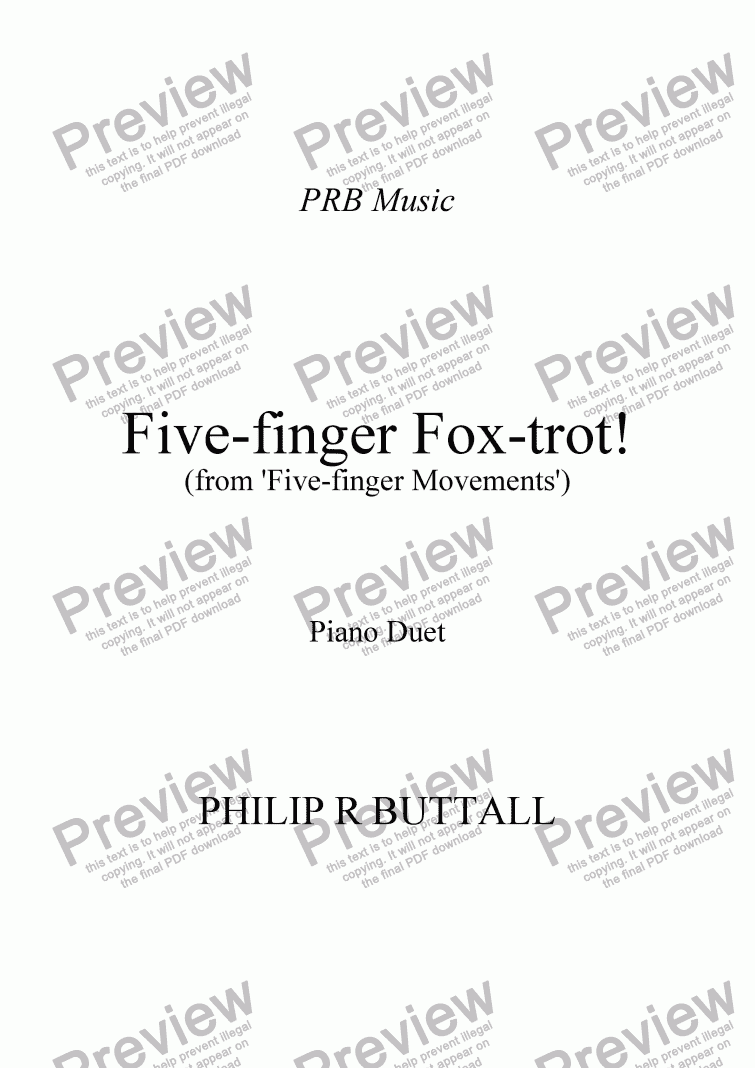 Composer
Philip R Buttall
Year of composition
2002
Lyricist
none
Publisher
PRB Music
Difficulty
Moderate (Grades 4-6)
Duration
3 minutes
Genre
Jazz music
License details
For anything not permitted by the above licence then you should contact the publisher first to obtain permission.

The initial idea for this came from some duets by Gerald Hengeveld, where the primo (student) plays in various five-finger positions, and the secondo (teacher)provides the main accompaniment. In Five-finger Fox-trot! I have followed this design, except that in the middle section, the five-finger pattern, whilst remaining the same, is used at the bass end of the piano, before returning to the treble for the opening theme’s return. I have allowed time for this, and the primo player can even incorporate a little ’dance’ as he or she changes end! There is a quicker swap just at the end, so it’s all hopefully light-hearted, as well as an essentially ’serious’ exercise. The rhythms in the primo part, whilst a little complex when seen notated, are easily picked up by most children, once they’ve heard them played! This, then, should be a fun ’novelty’ or ’party-piece’ for student and teacher, or second, more able student.
Following the welcome advice from some piano teachers, I have now done away with the complications of 8va lines, and excessive leger lines in the primo (student’s) part, and used global instructions like "Play Two Octaves higher!" and hopefully making it now more user-friendly to read.
Also, with the advantages of Sibelius 3 I have been able to add colour to make the fingering stand out, as well as, for example, Coda signs, all of which should make ’navigation’ somewhat easier.
This piece uses only the first five notes in the scale of G (shown at the start). There are now three further Five-finger Movement pieces, which make use of different scales, and dance-styles, Five-finger Disco!, Five-finger Waltz-time! and Five-finger Latina!!]