By: Martin Hauber
For: Solo instrument (Piano)
This music is in your basket
View basket
Loading... 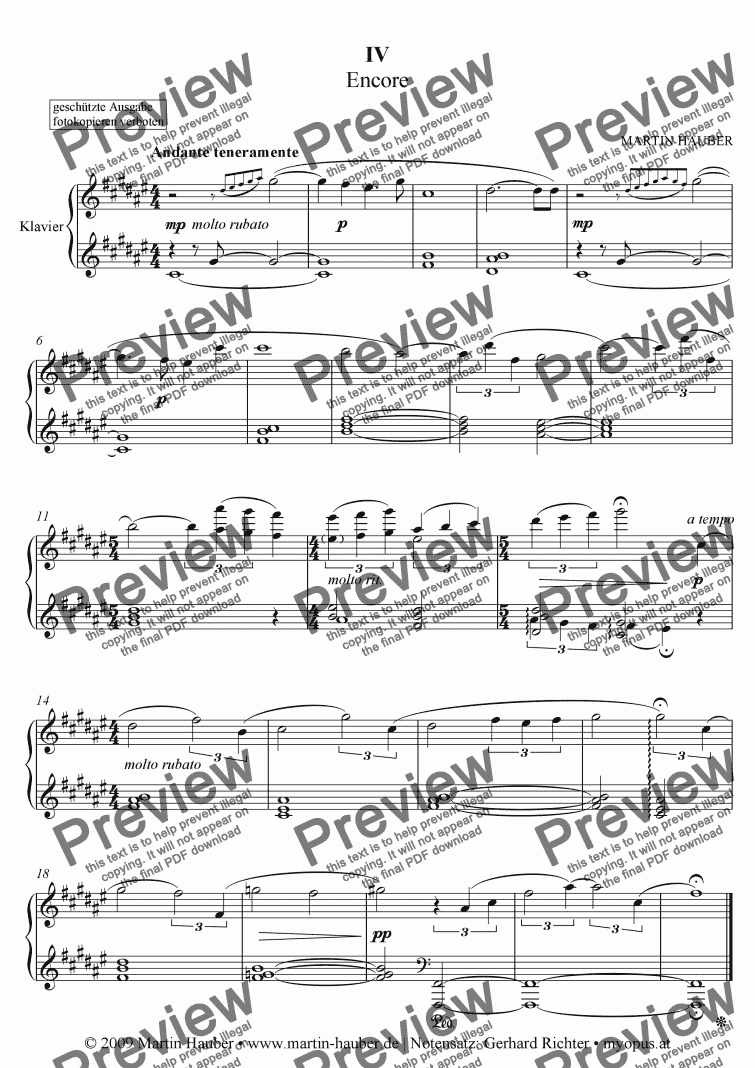 Composer
Martin Hauber
Year of composition
2007
Difficulty
Moderate (Grades 4-6)
Duration
2 minutes
Genre
Modern classical music
License details
For anything not permitted by the above licence then you should contact the publisher first to obtain permission.

addition to "Three Miniatures for Piano"

I have searched for the deepest reasons of happyness, and I found out this: The reason does not lie in making money or possession or luxury, nor in idleness or making business, not in producing or consuming. With happy people I always felt deep security as a reason, spontaneous joy in the small things and a big simplicity. Phil Bosmans, belgian writer.

Each of these three miniatures for piano is a programmatic snapshot telling a story of easy, static things, like the desolate, old plant nursery with rampant undergrowth which I discovered with Benjamin in summer of 2006 not far from our home.

or they tell about the painted triptych of Petra, in his warm Red on which a wave of yellow crystals swims from one picture to the next.

Or, however, they tell about the long way to want to bring a piano concert in three movements to an end.

And thus also Encore, the small addition in pure simplicity, never became the fourth miniature. There are pieces in life which remain small because the origin of all pieces is small. Nevertheless, nothing is too small to be insignificant. At least this is the origin of what we write down in our music, even if it seems to be insignificant for other people.

Sorry, there's no reviews of this score yet. Please .
In order to submit this score to ScoreExchange.com Martin Hauber has declared that they own the copyright to this work in its entirety or that they have been granted permission from the copyright holder to use their work. If you believe that this score should be not available here because it infringes your or someone elses copyright, please report this score using the copyright abuse form.