By: E. Gyimah Labi
For: Solo instrument (Piano)
This music is in your basket
View basket
Loading... 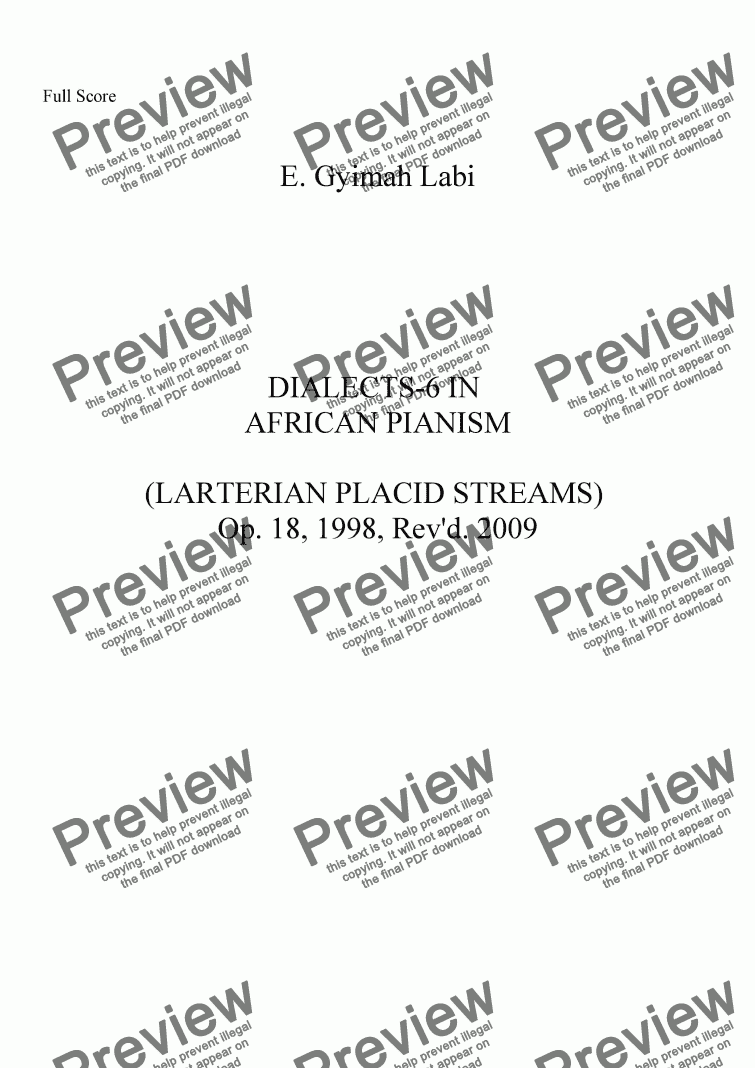 Composer
E. Gyimah Labi
Year of composition
2009
Difficulty
Difficult (Grades 7+)
Duration
8 minutes
Genre
Modern classical music
License details
For anything not permitted by the above licence then you should contact the publisher first to obtain permission.

The Six Dialects in African Pianism constitute an aspect of African art music that may be defined as music of serious artistic intent that is based in whole or part on the stylistic features of African traditional or popular music - written by a trained composer, as distinct from folk music. Here, the composer focuses on the performance practices as exemplified in structures that articulate the time line as well as those that have intermediate or soloistic functions, as far as drum music is concerned. Such sources would include the bell and drum patterns as well as musics for the xylophone and hand piano. The various structures obtainable on these instruments could be are appropriately or stylistically duplicated and expanded upon. Aside from instrumental folk music sources, the adaptation of African choral structures, directly, indirectly or in essence, is invaluable. What the composer aims at are originality, authenticity and perhaps identity. The compositional approaches in the Dialects, though open-ended, are derivatives of the musical traditions of Ghana. They reflect what ethno-musicologists refer to as the reversal and syncretic approaches to composition. The reversal technique enables the procedures in tonal music to be reversed and the logic of the reversals used as the basis for generating motions - be it harmonic, melodic or rhythmic, in terms of the particular nature of the acculturation process that the composer has undergone and his essential preferences at the chosen time. The syncretic alternative involves creativity that is based on vocal traditions. This entails critical observations as to how melodic, rhythmic and harmonic motions are generated at the traditional level. In the actual application of these devices, the overall syntax may be tonal, atonal, conjunct, disjunct, or dissonant, in whole or part, depending on the aesthetic preferences of the composer. In Dialects-6, in particular, all the basic influences that I have undergone seem to manifest in various guises. I have come to terms with the essential nature of African music - which is "motion in sound" as well as that of Western music, which is - "sound in motion." Each of these aesthetic positions results in fine music in the hands of those who know how. The quasi-architectural dimension of the piece reflects these positions in various degrees. In the folk songs of the Akan or Twi speaking peoples of Ghana, the songs involve percussion accompaniment. In many instances, although the tunes may be simple, the percussion accompaniment compensates for the lack of melodic sophistry. In the Tempo di Highlife section, I have tried to capture some of these mannerisms. The bass part, which seems to be static, is actually mimicking the bass drum. The exposed quarter-note utterances in the extreme tessituras, articulate the regulative beats, (i.e. the main beats within the time spans of the time lines). Also, those moments mimic other percussion instruments. A performance without agogic accents therefore becomes desirable. The Highlife Section is in compound duple time. There should be a feel for 2 main beats per measure. The duple dimension of compound duple is a result of the fact that, in the music of Africa, because of the interrelation between music and dance, there is always a duple feeling imparted through the footwork of dancers who tend to divide the measure of time into two. This psychological duple feeling cuts through even three-beat groupings that result in the sesqui-altra or the hemiola (3:2) effect. These compositions, then, constitute some of the results of my search for the African alternative in the world of "art" music and entail the boundlessness that the professional pianist may seek. I would like to state for the record that Dialects-6 was premiered by a friend of mine - the maestro pianist - Darryl Hollister of the Commonwealth School in Boston, Massachusetts. The London premiere was during CIMA Symposium and Festival in April 2000. The US premiere was during FESAAM Symposium and Festival in St. Louis, March 2001. The Six Dialects are: D-1 The Hunter’s Song, Op. 18, 1986, Revised in 1998; D-2 The Lotus, Op. 21 1987, Revised in 1997; D-3 Earthbeats, Op.22, Revised in 1997; D-4 The Pineapple, Op. 23, 1991; D-5 The Ancients Revisited, Op. 24 1993, Revised in 2009 and D-6 Larterian Placid Streams - Op. 28, 1999. Revised in 2009 - previously dubbed “The Streams of Esentre” - These Dialects are now dedicated to the most influential music teacher that I ever had - in the name of John Barham - an Englishman who taught us music at Achimota School, Ghana, from 1965 to c.1972. For my generation, after this remarkable teacher and musician, there was little else that would be new in music again. E. Gyimah Labi Essex County College North Brunswick, NJ. 2001