By: Matt Cadirao
For: Concert band / wind band
This music is in your basket
View basket
Loading... 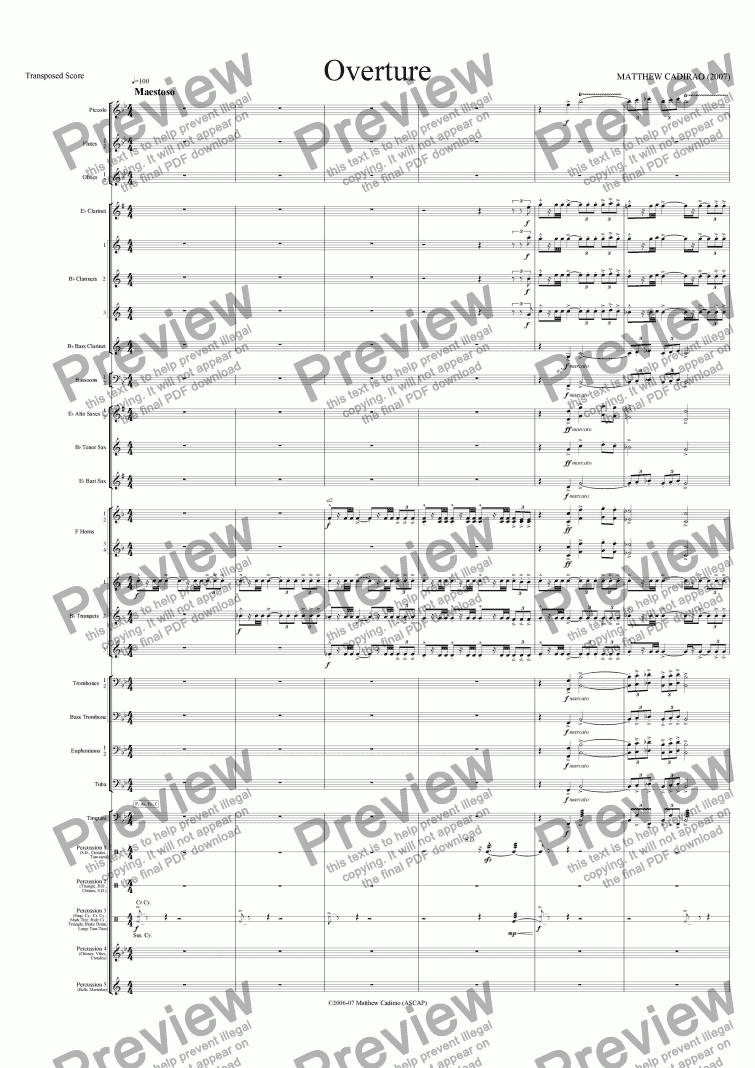 Composer
Matt Cadirao
Year of composition
2007
Difficulty
Difficult (Grades 7+)
Duration
9 minutes
Genre
Modern classical music
License details
For anything not permitted by the above licence then you should contact the publisher first to obtain permission.

Here is a "not-really-complete" wind ensemble piece simply titled "Overture." It is not really an overture to anything, but incorporates drastically different styles due to my growth during the course of this composition. I started it in 2006 as a middle school band piece and reworked on it for a more advanced level in 2007, but never formally completed it. In 2009 for a reading session I fixed up some parts and wrote an "ending," but the piece still does not have a real sense of completion (perhaps it never will). The reason I halted work on it was that my composition style went through some drastic changes: Listen to the progression of styles from one to the other. I find it really neat to hear just how much I grew within a couple years.

* If you want to know what was going in my head while I was composing it, think "video game music." Similar to, but a couple years before "Of Myth and Magic"…it does have a similar through-composed structure which I am a big fan of. I like the idea of a musical journey where ideas in the piece may or may not be related to others:

After a short introduction (which I actually wrote in 2008), there is a bright allegro section where the main melody is presented in the trumpets. It get distributed around various ways before being interrupted (but the "Tranquillo" section) and after a couple secondary melodies, is revived again around m. 112. It comes back rather boastfully before transitioning into what seems to be a lighter and bouncier variation on one of the secondary melodies, before being interrupted by a clarinet cadenza.a

This transitions into the next section (perhaps considered "B") which is starkly different than the previous "A" section [Originally I intended a broad ABA structure]. Here I use a similar melody-and-accompaniment style as previously, but the accompaniment is a lot thicker and more irregular; free yet controlled. An alto sax solo laments a variation on the original melody [which I later realized sounds very similar to Brothers' Cazimero "The Sound of the Sea Surrounds Me"…oops?] and the mood changes as the rest of the band enters in response. M. 189 I originally had written "Magical…" because I wanted a bittersweet magical feeling in the original middle school version, hence altered. Next, a lamenting trombone solo pulls us further down [yes, at this point I had virtually abandoned happy go-lucky music] into the next, marked "misterioso". I experimented with new timbres and aleatoricism for a nice "blurred" musical effect, which I believe worked quite well. The tension and chaos here all came together at perhaps the most powerful moment in the piece, measure 222. I envisioned an epic battle stemming from the previous "events," only to build up and grow into….a timpani solo? I actually thought it was a neat effect, along with other percussion which a long time ago had elements of gagaku (since removed)….then a short yet peaceful coda as the battle ends and the lands are barren, and we are left uncertain as to the conclusion….

* The MP3 is from the November 2009 reading session, where I got to hear this for the first. The musicians are from the University of Hawaii Symphonic Wind Symphony, conducted by Grant Okamura. They are sightreading, so it is not a perfect performance. And yes I did splice the different takes and electronically altered the tempo.

Of Myth and Magic