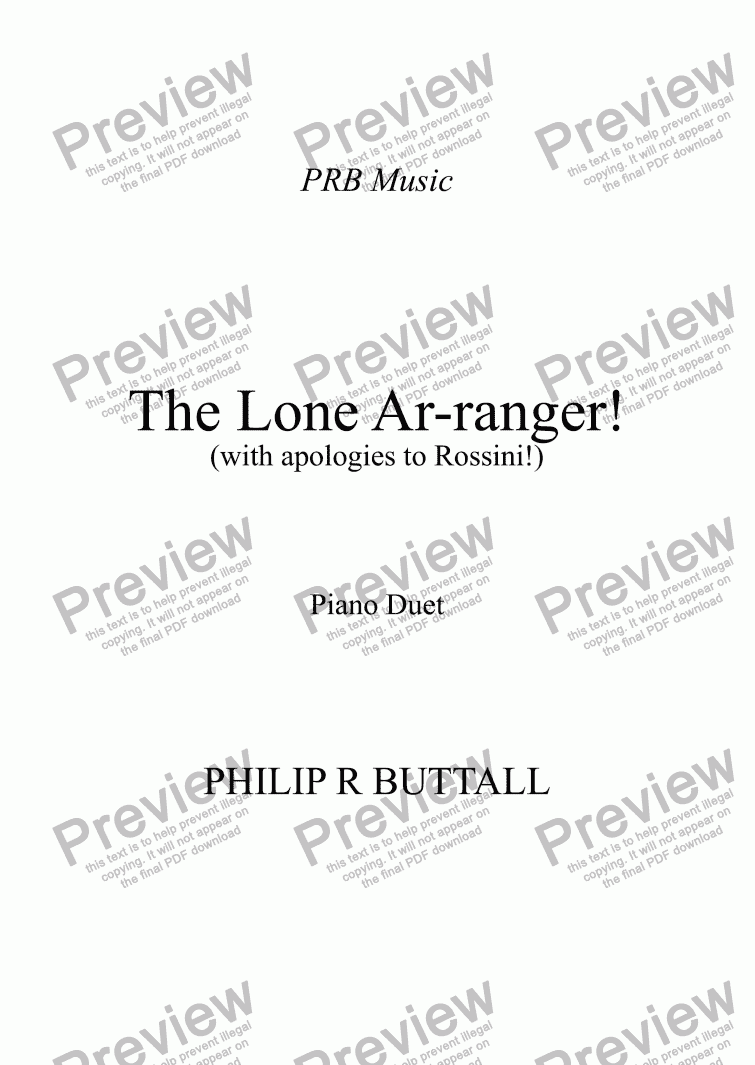 Composer
Philip R Buttall
Year of composition
2002
Publisher
PRB Music
Difficulty
Difficult (Grades 7+)
Duration
3 minutes
Genre
Classical music
License details
For anything not permitted by the above licence then you should contact the publisher first to obtain permission.

I have been so pleased with the feedback I have had from The Lone Ar-ranger! in its original versions. It is still available, but really for sentimental reasons, being the first piece I ever uploaded to the former Sibelius Music.

We’re never too old to take on board any constructive criticisms of our work, so this updated arrangement is now based on the newer solo piano version, which gave me the opportunity to tweak the ending slightly, and include a few new tunes. The very final tune, just before Rossini’s coda, does have a special relevance to a certain Music Notation Programme! - and does seem to provide an appropriately Karelian ’Finnish’!

This update received its first performance at a WarChild Gala Charity Concert at Plymouth City Museum & Art Gallery on Saturday, May 18th, 2002.

Following a number of requests worldwide, I have now uploaded a special non-playing score, which lists, and identifies all the tune fragments used in The Lone Ar-ranger!

STOP PRESS: Top UK piano-duo, Anne Applin and Geoffrey Pratley, used The Lone Ar-ranger! as one of their set pieces in October 2012’s duet course at Benslow. I have therefore tidied up a few places, as well as dedicating this slightly-tweaked version to the duo. I do hope the other course-members enjoyed playing it, too!