By: Arturo Rodriguez
For: Orchestra
This music is in your basket
View basket
Loading... 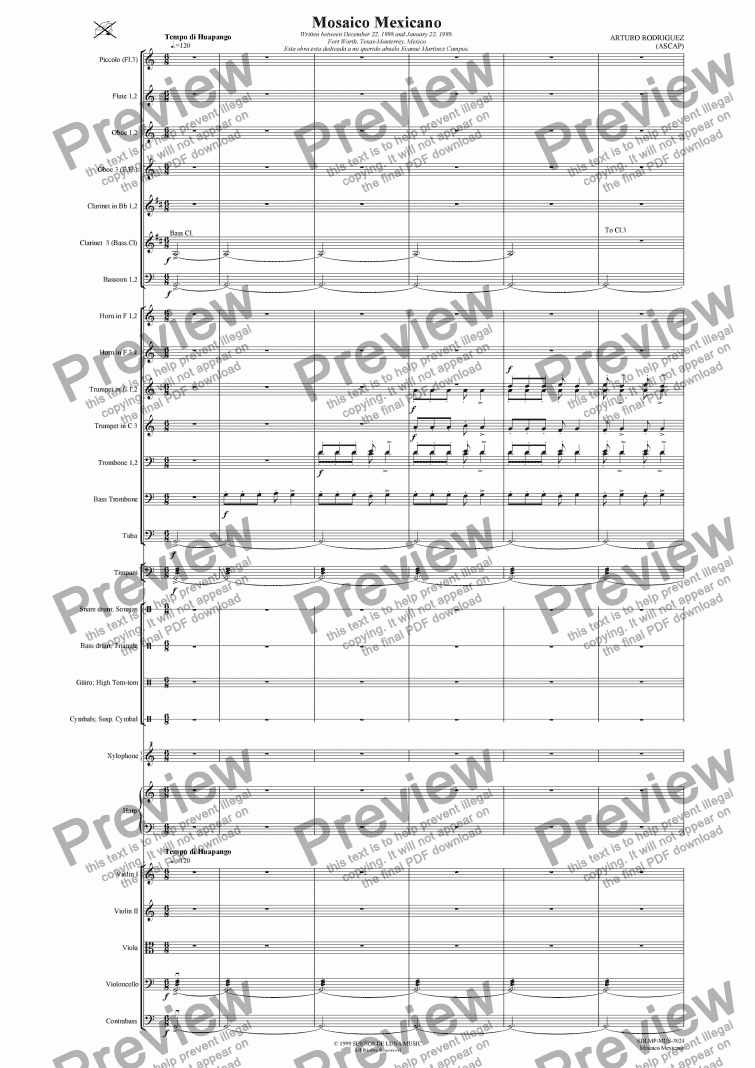 By: Arturo Rodriguez
For: Orchestra

Composer
Arturo Rodriguez
Year of composition
1998
Lyricist
none
Publisher
Sue�os de Luna Music
Difficulty
Difficult (Grades 7+)
Duration
12 minutes
Genre
Other
License details
For anything not permitted by the above licence then you should contact the publisher first to obtain permission.

Mosaico Mexicano (1998), a Mexican overture for large orchestra, following in the tradition of the great Mexican nationalist composers (Moncayo, Chavez, Revueltas), this is perhaps the composer?s most popular work to date. The overture is a compendium of sections that draw on three principal styles and tempos. The first, marked Tempo di Huapango, is a brisk, foot-tapping mariachi music. The second introduces a theme in the style of indigenous Mexican Indian music, introduced first by E-flat clarinet and repeated three times, each time with expanded orchestration. The third distinct section slows the pace to a more intimate serenata. A string quartet passage opens the section, with pizzicato imitating the oversize guitar that would be used in a Mexican serenata. The violins take the roles of two singers. Rodr?guez uses all three of his principal themes for the exuberant conclusion to his overture, neatly tying them together with a fourth tune that he hints at earlier. First performed by the Texas Christian University under the musical direction of the composer himself. The work?s professional premiere took place in 2000 by the Dallas Symphony Orchestra, under the baton of maestro Germ?n Gutierrez. The score calls for three flutes (third doubling piccolo), three oboes (third doubling English horn), three clarinets (first doubling E-flat clarinet; second doubling bass clarinet),two bassoons, four horns, three trumpets, three trombones, tuba, timpani, percussion (snare drum, sonajas, g?iro, high tom-tom, xylophone, bass drum, triangle, cymbals, suspended cymbal) harp and strings. A recording of Mosaico Mexicano is now available on CD on the album From Earth to Mars. Music composed and conducted by Arturo Rodr?guez. CD available through amazon.com and cdbaby.com

Sorry, there's no reviews of this score yet. Please .
In order to submit this score to ScoreExchange.com Arturo Rodriguez has declared that they own the copyright to this work in its entirety or that they have been granted permission from the copyright holder to use their work. If you believe that this score should be not available here because it infringes your or someone elses copyright, please report this score using the copyright abuse form.