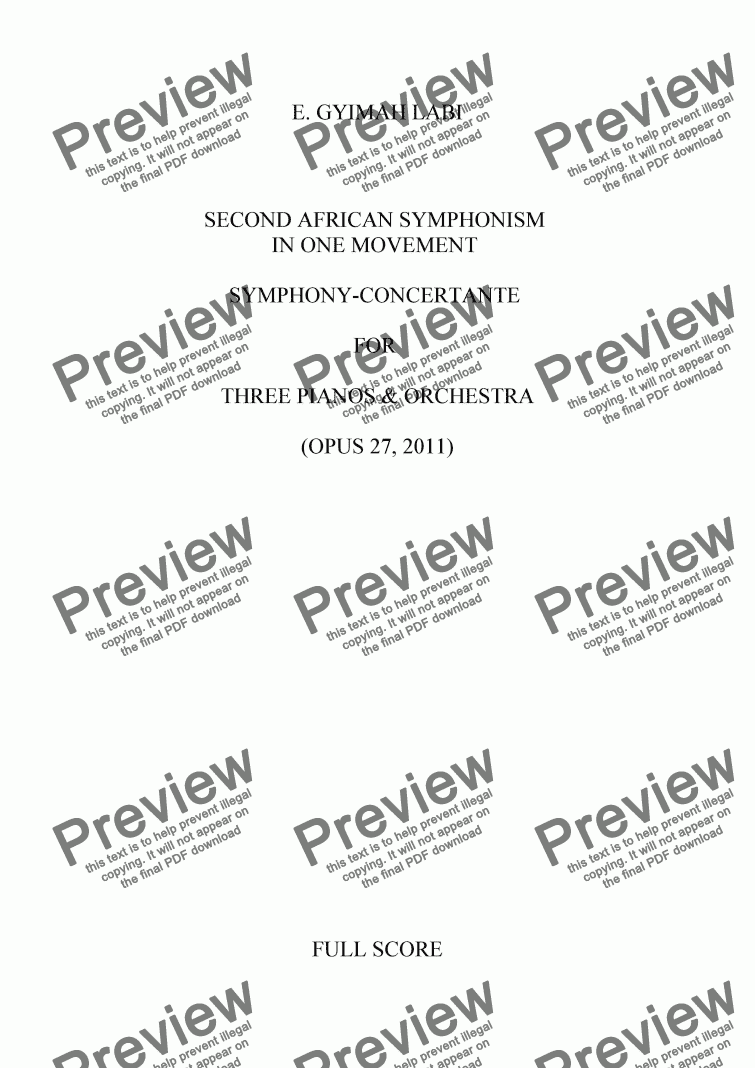 Composer
E. Gyimah Labi
Difficulty
Difficult (Grades 7+)
Duration
25 minutes
Genre
Modern classical music
License details
For anything not permitted by the above licence then you should contact the publisher first to obtain permission.

This work was commissioned by the Royal Liverpool Society in November of 1995 as a result of my participation in the Composers’ Project during Africa 95 – a season devoted to the Arts of Africa – from Antiquity to the Present. At this time, I was a music professor at the School of Performings Arts, University of Ghana at Legon. Africa ’95 that took place in England, was a nationwide season of African arts in gallaries, museums, community centers and universities; on television and radio, running from August to December 1995. It was made possible through the enthusiastic support of major british arts institutions – in particular, The Royal Academy of Arts, whose exhibition on African artistic Heritage formed the center-piece of Africa 95 season. The events covered contemporary painting, sculpture and photography, theatre arts, dance, music, literature, cinema, fasion and public debate. It was a season of education, seminars and public debate reflecting the diversity of ideas and visions of African artists of African descent. I essence, it was a program of international workshops in Africa and the UK – inspired and directed by artist – to increse networks and share ideas.

By the nature of the materials that I presented for the Composers’ project – a week long project of workshops, seminars and concerts, organized by Africa ’95, in collaboration with the University of Liverpool, Liverpool Hope College, Liverpool John Mores University and the Royal liverpool Philharmonic Society, a decision was made to commission me for a new piece for Six Pianos and Orchestra. They had Piano Circus – a group of 6 Pianists who perform as an ensemble. Within 6 months, I came up with my Second African Symphonism: Symphony-Concertante for Six Pianos and Orchestra. It was premiered the following year in Liverpool - November 1996. It is 25 minutes in duration.

In 2000, while collaborating with the International Center for African and African-American Music and Dance (ICAMD) based in Missouri, Symphony-Concertante was reduced to Three Pianos and Orchestra and during its Festival and Symposium held during March 30 – April 1, 2001, in Saint Louis, it received its American debut – featuring the Saint Louis Symphony Orchestra, under the baton of Maestro Dr. Leon Burke III. The piano soloists featured Professor Eric Moe of the University of Pittsburgh, Professor Mark Boozer of Clark Atlanta University in Atlanta, Georgia and the the “incomparable” Darryl Hollister of Commonwealth School in Boston, Massachusetts.

The work has now received its third and final retouch in 2011. It derives its essence from the singing and drumming mannerisms of the Anlo-Ewes of Ghana. Its melodic and harmonic syntax is quartal – the principle of generating melodic and harmonic motions that utilize superimposed 4th as the essential tones. The tertian moments therefore provide relief to the predominantly quartal atmosphere. The three Marches however remind us of the inherent charm entailed in the well-tested tertian harmonic principles and offer us instances of Modal-tertian renditions. This work is art music that reflects both the Western compositional ideal of "Sound in Motion" and the African musical ideal of "Motion in Sound" Music producers and impresarios would find this work to be a charming example of African Symphonism (style of writing). Dr. E. Gyimah Labi Seattle, WA, USA 07/08/2011