Sign in / Register
HomeInstrumentationsBrass bandOh Where, Oh Where has my Little Dog Gone (Air and Variations)[Brass Band]

Oh Where, Oh Where has my Little Dog Gone (Air and Variations)[Brass Band]

By: trad.
For: Brass band
This music is in your basket
View basket
Loading... 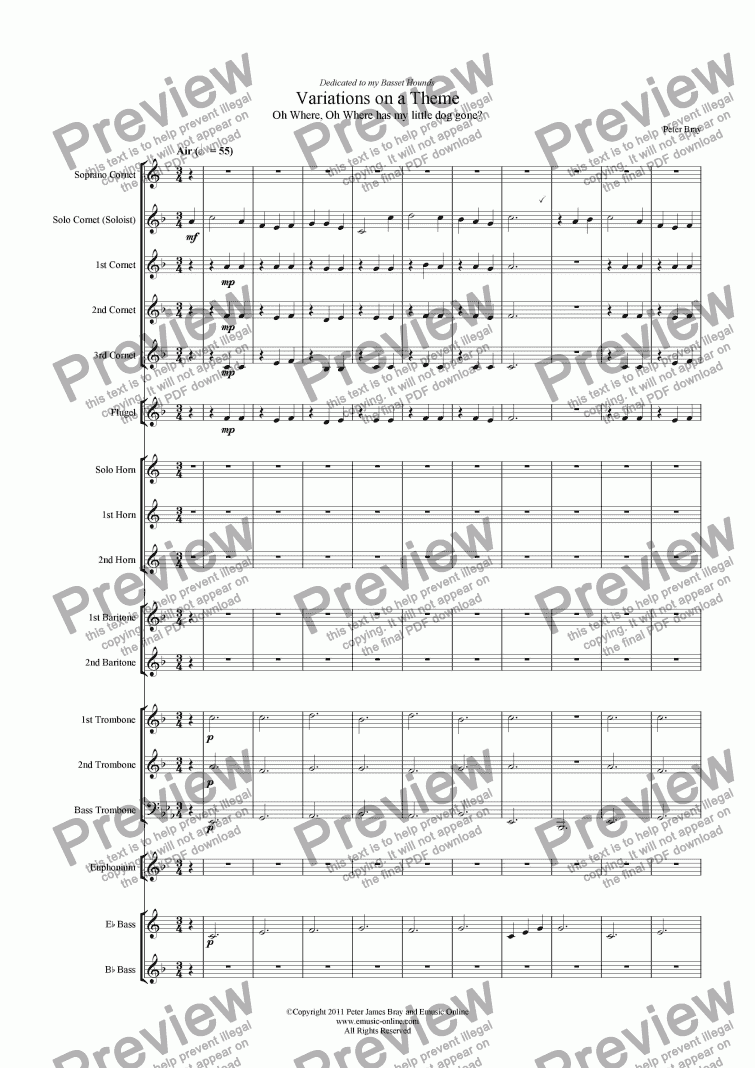 Oh Where, Oh Where has my Little Dog Gone (Air and Variations)[Brass Band]

By: trad.
For: Brass band

Composer
trad.
Year of composition
1700
Arranger
Peter Bray
Difficulty
Moderate (Grades 4-6)
Duration
3 minutes
Genre
Other
License details
For anything not permitted by the above licence then you should contact the publisher first to obtain permission.

I decided to do it based on the early 20th Century brass band style of the air (theme) and variations for solo instrument. Famous and popular works both at the concert and on the contest stage, include �Carnival of Venice� by Jean Baptiste Arban, �Grandfather�s Clock by George Doughty �Grandfather's Clock', by George Doughty, has been part of the staple repertoire for Euphonium players since time immemorial. Its established format of an Air and set of Three Variations, with a exhilarating final flourish, had been the template for many similar solos throughout the ages.�[www.safemusic.co.uk, accessed 07/01/2011].[Youtube accessed 07/01/2011]nnFor variations to work well and to give more development, then you want a simple tune and simple chords; especially for this particular style. Like the Carnival of Venice the tune is �My Hat has got three corners� and �Grandfather�s Clock� speaks for itself. It is this template that I wished to use for my own Air and Variations. Of which the tune for my air and variations �Oh Where, Oh Where has my little dog gone?�, for both musical and personal reasons.nnThe Words are: -nn�Oh Where, Oh WherennHas my Little Dog Gone?nnOh Where or Where Can he be?nnWith his ears cut shortnnAnd his tail cut longnnOh Where or Where Can he be?�nnThe aim was to for the variations to keep a resemblance to the air. Like Jean Baptiste Arban with the Carnival of Venice, I have decided to compose four variations, each one getting more and more technically difficult. But still keeping thennsame harmonic chord sequence that allows the connection between air and variations to made and kept.nnThe Air is the tune �Oh Where, Oh Where has my Little Dog Gone?� and a verse which I have obtained by aural perception from here by listening to a version of it sung by an unknown artist. [Youtube accessed 07/01/2011]nnThe main thematic idea is then played again, but this time with a counter melody from the Euphonium and decoration from the Soprano Cornet.nnThe first variation keeps the tune but it is quite strongly ornamented and is quite flourishy in places. We then see a small return of air played by the full band as bridge into the next variation.nnThe second variation is a lot more fluid and varied, however the underlying harmonic sequence and chord progression keeps the link between theme and variation. Because of the long phrasing, proper breathing and support is require to last between breath marks. The bridge between second and third variation use the main theme but utilises the melodic development of the second variation.nnThe third variation, carrying on the trend in getting more technically demanding and is even more fluid and free. But the main difference this time the whole thing has modulated up a tone. Yet again it keeps the same chord sequence. The bridge between third and fourth variation use the main theme but utilises the melodic development of the third variation.nnThe fourth variation is certainly quite cliché in terms of melodic development in variations. Like in the Carnival of Venice and Grandfathers Clock, the tune comes through on the accented notes of the bar, with a turns and flourishes in between. If played really well can it can sound like more than one player playing it.nnThe finale of this work is a short rendition of the main thematic idea. That has a nice flourish at the end from the soloist.nnI chose to do four variations as it fairly standard for this type of work but can vary depending on the composer/arranger. Grandfather�s Clock has three. Carnival of Venice has four, and can be heard here with David Childs playing Carnival of Venice on Euphonium at the BBC Proms 2007 [Youtube [accessed 07/01/2011]nnThe Variations in F by Friedrich Weber for trumpet and piano have four variations [Eklund, 2003], �Cavatine et Variations� has three variations and the �Vois tu la Niege qui Brille� by Arban also has a finale as well as the three variations. [Arban 1907]nnReferencesnnBibliographynnJean Baptiste Arban,(1907) Cornet Method (Sheet Music) Boosey and HawkesnnMichael Kennedy (1985) Oxford Dictionary of Music, Oxford University PressnnWebography www.safemusic.co.uk , accessed 07/01/2011].nnBenjamin BRITTEN: The Young Person's Guide to the Orchestra, Op. 34 Part 1 The conductor is Michael Tilson ThomasnnLondon Symphony Orchestra www.youtube.com/watch?v=kR9nDnyIhAU [accessed 07/01/2011]nnPaganini's Carnival of Venice arranged Arban/Camerata/Childs performed by euphonium soloist David Childs with orchestral accompaniment. At the BBC Proms in the Park 2007 www.youtube.com/watch?v=Aqw8v1ILB2g [accessed 07/01/2011]nnChildren's song. Recording is copyrighted to Songs for Children Ltd.nnOh Where, Oh Where has my little dog gone?� www.youtube.com/watch?v=tWne5zfgmhU [accessed 07/01/2011]nnBlack Dyke Mills Band, Grandfather�s Clock www.youtube.com/watch?v=SsZ1BAharfI [accessed 07/01/2011]nnDiscographynnNiklas Eklund, (2003) Trumpet Concertos [CD]

Reviews of Oh Where, Oh Where has my Little Dog Gone (Air and Variations)[Brass Band]

Sorry, there's no reviews of this score yet. Please .
In order to submit this score to ScoreExchange.com Peter Bray has declared that they own the copyright to this work in its entirety or that they have been granted permission from the copyright holder to use their work. If you believe that this score should be not available here because it infringes your or someone elses copyright, please report this score using the copyright abuse form.