By: Gerald Manning
For: Choir
This music is in your basket
View basket
Loading... 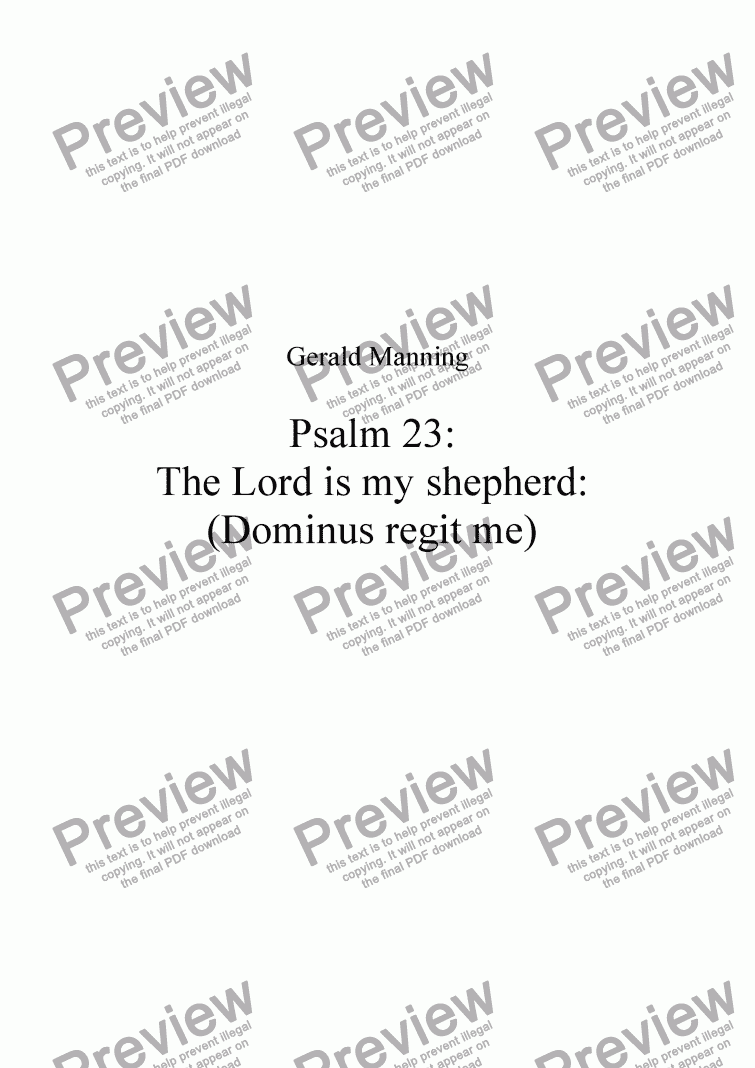 By: Gerald Manning
For: Choir

Composer
Gerald Manning
Year of composition
2011
Lyricist
Psalm 23
Publisher
MANNING SCHOOL
Difficulty
Moderate (Grades 4-6)
Duration
5 minutes
Genre
Classical music
License details
For anything not permitted by the above licence then you should contact the publisher first to obtain permission.

ANTHEMS FOR ALL OCCASIONS THE LORD IS MY SHEPHERD Text: Psalm 23 Music: Gerald Manning

The English word �Anthem� has been derived from the Anglo-Saxon �antefen�, which in turn is from the Greek �antiphona�. Anthems evolved in relative independence of European idioms in the Anglican Church after the Reformation, and are one of the most characteristic of English musical forms, and are usually sung at a certain point in the service although they are not necessarily a part of the service as the Canticles and Psalms are. Of English origin an injunction was inserted into the Prayer Book in 1662 that �In quires and places where they sing, here followeth the anthem�. In its early form, a hymn sung alternately or responsively by a dived choir. Arguably the best-known hymn with the melody Crimond, which is generally attributed to Jessie Seymour Irvine is one of many used by composers setting this 23rd Psalm of David: which include the Brother James Air, Amazing Grace, Belmont, Evan, Martyrdom, Orlington, and Wiltshire. However the status pertaining to the Anthem is comparable to that of the Motet (q.v.) in the Latin Church. Long before the Reformation the term was used in England interchangeably with Antiphon (q.v.). As used today, the anthem is music for mixed solo voices and choir based on a text selected from the Scriptures or the Book of Common Prayer, or from poems of sacred character. Many of the composers of Tudor church music wrote to Latin texts with English translations, but by the Seventeenth Century marked differences between the Latin motet and the English anthem were noticeable. William Byrd and Orlando Gibbons were pioneers in anthem writing in which solo passages and organ or string accompaniments were introduced. In the Restoration period, the anthems of John Blow and Henry Purcell became longer, taking on the character of short cantatas (q.v.). Handel wrote anthems based on the Purcell model, with choral numbers, arias, duets and quartets for solo voices, and important orchestral interludes. The Eighteenth Century anthem became stereotyped and conventional. S.S. Wesley in the Nineteenth Century revived the artistic status of the anthem, wrote an independent organ accompaniment, which did not merely duplicate the voice parts and gave it its present form.