By: Stephen Pompa
For: Solo instrument (Solo)
This music is in your basket
View basket
Loading... 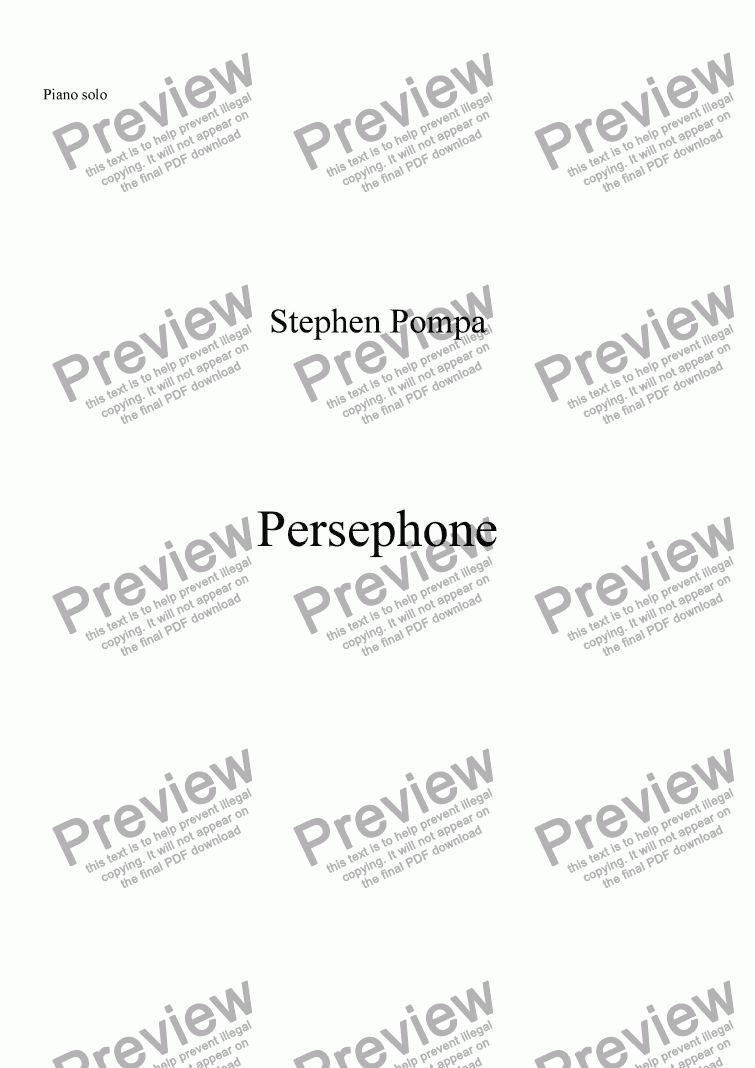 Composer
Stephen Pompa
Year of composition
2011
Difficulty
Difficult (Grades 7+)
Duration
8 minutes
Genre
Modern classical music
License details
For anything not permitted by the above licence then you should contact the publisher first to obtain permission.

Persephone is a dramatic piece for solo piano composed between the years 2003 and 2011, and is based on the Greek myth of the goddess Persephone, her mother Demeter, and the god of the Underworld, Hades. I deviate slightly from the various retellings of the story, which readers are encouraged to examine on their own. I envision more of a struggle between Demeter and Hades, and I also envision Demeter winning total freedom for Persephone. Indeed, this is an especially programmatic work; each section in the music is meant to evoke some part of the Persephone myth, and there are several motifs that function in the same way. The list of sections is as follows:

Mm. 1—35: Hades calls out to Persephone and subsequently kidnaps her.

Mm. 36—76: Helios the sun god witnessed the event and tells Demeter what happened.

Mm. 77—105: Demeter flies into a rage and frantically begins to look for Persephone.

Mm. 139—155: Demeter sees Persephone from afar, in chains. She gets a glimpse of Hades before getting close enough to confront him.

Mm. 156—191: Demeter clashes with Hades and overcomes his power. The chains of Persephone break.

Mm. 224—end: The gates of Olympus open wide to welcome the two goddesses back.

The story of Persephone is a myth and is not meant to be taken at face value; it is meant to be applied to personal situations. The listener and performer are invited to interpret this immortal story in a way that will be symbolic and meaningful for them.

Please note that pedal indications and some other articulations have been kept to a minimum so as not to interfere with the performer's interpretation. I, however, tend to use the pedal generously and play the piece quite legato. Tempo markings are also to be used only as a general guide.

Sorry, there's no reviews of this score yet. Please .
In order to submit this score to ScoreExchange.com Stephen Pompa has declared that they own the copyright to this work in its entirety or that they have been granted permission from the copyright holder to use their work. If you believe that this score should be not available here because it infringes your or someone elses copyright, please report this score using the copyright abuse form.