Sign in / Register
HomeInstrumentationsSolo instrument + pianoSonata No. 1 in D major

By: Jordan Johnson
For: Solo Solo Violin + piano
This music is in your basket
View basket
Loading... 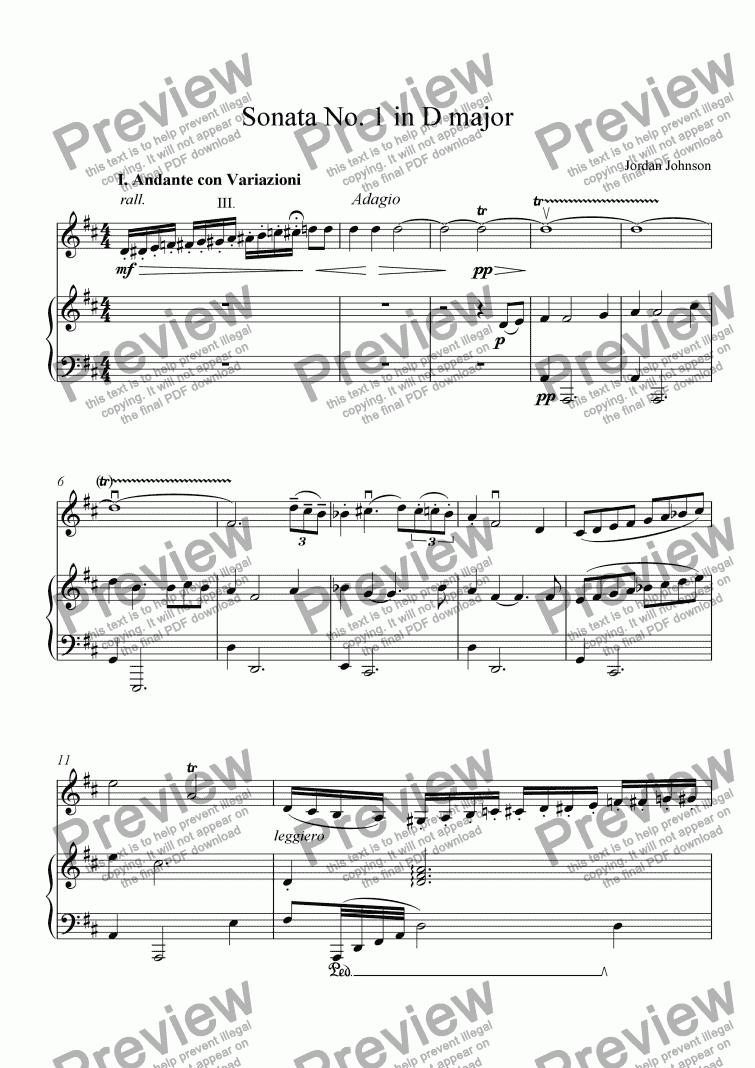 Composer
Jordan Johnson
Year of composition
2011
Difficulty
Difficult (Grades 7+)
Duration
25 minutes
Genre
Classical music
License details
For anything not permitted by the above licence then you should contact the publisher first to obtain permission.

This violin sonata is the product of much deliberation, effort and energy. It is not only one of my attempts to create genuine original music, but also an attempt to positively incorporate ideas presented from many of my favorite composers and pieces. The first movement, the andante con variazioni, was inspired by the gorgeous melody from the first movement of Tchaikovsky's violin concerto and the variations from the second movement of Schubert's violin fantasie. As a starting point, I also chose the warm, proud key of D major. I wanted very badly to create an original, serene melody that was simple but thought-provoking. A darker timbre was needed to contrast with the happy and bright color of the first theme, so I chose the relative minor, B minor, for the cool, calm and collected flow of second theme. Also accounted in the composition process of this movement was the character and personality of its dedicatee, Rachel Leffel. I hope you enjoy it!

The second movement, dedicated to Ashley Vince, is dynamic, fast-paced Allegro in C-sharp minor. This colorful and powerful storm of the sonata was conceived out of a desire to experiment with chromaticism. At the time I was listening to the second movement of the Franck Sonata. I was captured by his use of chromatic movement and flowing passages that hide the expected tonal centers from the listener's ear. I also sought to incorporate this idea of ascending and descending scalar passages found in the first movement of Brahms violin concerto. This movement is capped off with a cadenza for the violin and a transition into the third movement. I hope you like it!

The third movement, an Interlude marked Allegretto, is a calmed compliment to the restlessness of the what has come before. This rich and mellow part of the sonata was procured because of a need for simplicity and tonal harmony. Unlike the other movements, this one doesn't have any direct outside musical influences. I was very much inspired by the humble and peaceful personality and true character of its dedicatee, Megan Fronckoski. Enjoy!

The finale, an Allegro Luminoso, is the culmination of the violin sonata. It opens with a brave and ambitious cadenza in the piano. To recap the entire piece, I based the chords from the main theme of the first movement. Moreoreless similiar to the second movement, this one is an experiment with new ideas. I wanted to maintain the simplicity and originality of the first movement so I opened the Allegro in D major with the all parts playing the main melody. The B minor adagio is reminiscent of the minor theme from the opening movement. The semi-fughetta opening the development is my attempt at trying a new compositional idea. Probably the most-influenced movement, I've attempted to incorporate melodic ideas from Dvorak, Beethoven, Bach, Mendelssohn, Franck and Brahms. This last movement is dedicated to Shydreonna Collins and her beautiful twins. I hope you all enjoy listening to this as much as I have composing it!

Reviews of Sonata No. 1 in D major

Sorry, there's no reviews of this score yet. Please .
In order to submit this score to ScoreExchange.com Jordan Johnson has declared that they own the copyright to this work in its entirety or that they have been granted permission from the copyright holder to use their work. If you believe that this score should be not available here because it infringes your or someone elses copyright, please report this score using the copyright abuse form.