By: David Stybr
For: Brass quintet
This music is in your basket
View basket
Loading... 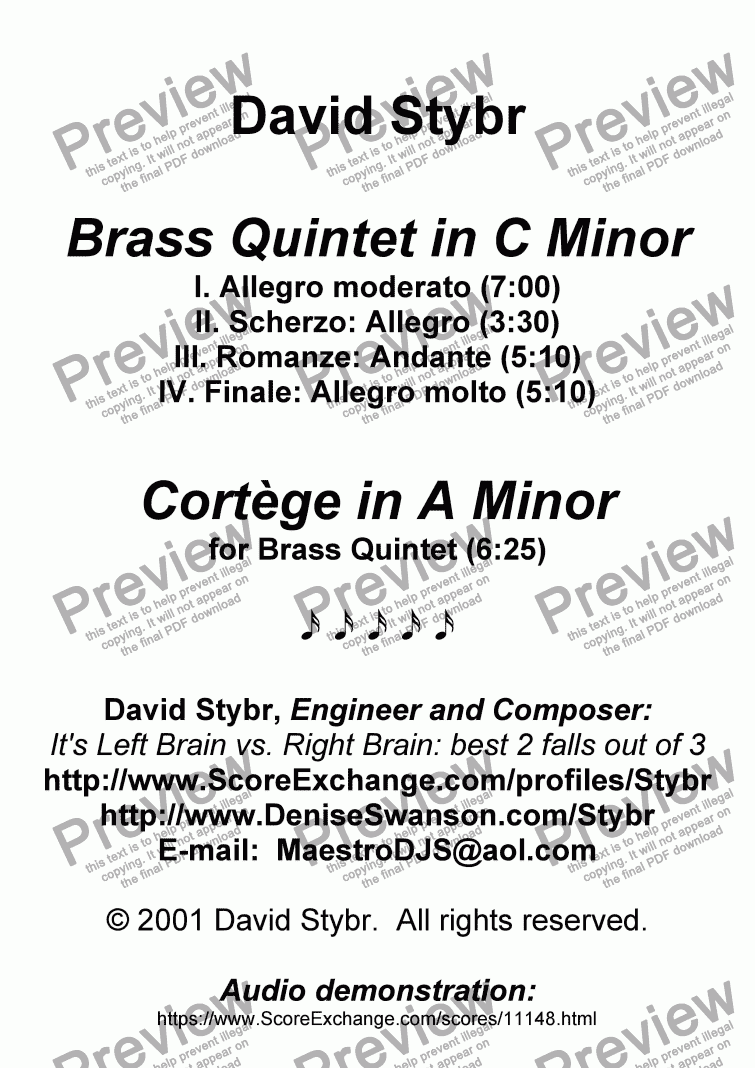 By: David Stybr
For: Brass quintet

Composer
David Stybr
Year of composition
2001
Lyricist
none
Difficulty
Difficult (Grades 7+)
Duration
28 minutes
Genre
Modern classical music
License details
For anything not permitted by the above licence then you should contact the publisher first to obtain permission.

Here in a single score is the complete 4-movement Brass Quintet in C Minor, plus an encore: Cort�ge in A Minor for Brass Quintet. The individual movements had been posted as they were completed in 2001. Note: Parts available upon request.

I. Allegro moderato – LB: "The 4 movements are in C Minor, A Major, A Minor and C Major respectively. C Major and A Minor have identical key signatures, whereas C Minor and A Major are distantly related. This 1st movement is a Sonata Allegro: brief Introduction, Exposition, fugato Development, Recapitulation and Coda." RB: "All right, Weisenheimer, I have a few tricks up my sleeve too. Theme I and Theme II have 4-phrase structures: AABA. Behold, their 3rd phrase is the same Chorale, which evolves into a quasi-theme. And that's not all, folks! Theme II glides through 3 or 4 tonalities; lyrical, yet it hogs all the keys. The fugato development in F-Sharp Minor chops up parts of the Introduction, Theme I, Theme II and the Chorale. Pretty snazzy eh?" LB: "Technical structures are generally my concern." RB: "Good thing I kept an eye on practical details. The 1st draft of this movement almost killed the tuba player. We could have renamed it Totentanz f�r Ba�tuba. The tuba is a huge instrument with an enormous need of air, so I inserted far more rests for everybody to breathe. Otherwise we'd need a hybrid bagpipe-tuba for extremely long breaths." (21 July 2001, Saint Charles, Missouri)

II. Scherzo: Allegro – RB: "I am very impressed by this piece. Extremely impressed. It is written in A Major, but no sooner is one key firmly stated, when the music slips into another: D, G, C, F, B-Flat etc. Then it slides back into A Major again. Scherzophrenic, if you ask me." LB: "This brief Scherzo is in concentrated rondo form: ABACDABACoda. It also has some elements of my beloved sonata form. Section C is literally a trio for 2nd trumpet, trombone and tuba in canon. Section D is a development section: all 3 themes A, B and C in counterpoint." RB: "A brass quintet might find this difficult to play. The arpeggios in particular are hard to execute, but they emphasize the key, which then changes almost immediately. Perhaps a professional ensemble would not have a problem. If they did, it would only increase the excitement." LB: "This is truly ensemble music." (23 May 2001, Lawrence, Kansas)

III. Romanze: Andante – LB: "This Romanze is in rondo form: ABACABA. It remains entirely in A Minor and its relative major, C Major, despite many attempts to modulate into other keys." RB: "This movement took quite a different direction from expected. It almost had a mind of its own! This makes composition truly exciting, but before long I had too many ideas for a single movement. The music diverged from a Romanze into a spooky Cort�ge, also in A Minor. Gee whiz, now I have two 3rd movements on my hands: fraternal twins, so to speak. Actually, this Romanze is the real 3rd movement of my Brass Quintet. The Cort�ge in A Minor is a separate piece." LB: "Given your predilection for change and development, and your general unruliness, one should not be surprised at this sort of musical divergence." RB: "Now just a cotton-pickin' minute! Are you casting asparagus on my compositional techniques? I'll have you know that I saved this 3rd movement for last. I waited until I was good and ready to compose it." (28 July 2001, Ann Arbor, Michigan)

IV. Finale: Allegro molto – LB: "The Finale seems at first to be in rondo form, but is in sonata form. Theme I is a jaunty March in C Major, and Theme II is a stately Chorale in F Major. The exposition is repeated in slightly varied form, but with the Chorale in G Major. Fragments of both themes are in counterpoint and in augmentation during the development. The recapitulation presents the 2 themes in reverse order, followed by a very brief coda." RB: "Right you are. The Finale evolves into a tug-of-war between C Major, F Major and G Major, until G-Flat Major suddenly takes over! I need some help from Arthur 'Six Flats' Jackson, nudge nudge, wink wink, say no more! Did he compose in the flat?" LB: "Leave it to you to quote Monty Python in a musical analysis. The home key of the Finale is C Major, with F Major the subdominant and G Major the dominant. G-Flat Major is exactly between these, and the remotest possible key from C Major." RB: "Arpeggios also create some gorgeous bell-like sonorities. After all, brass instruments have bells. Well, as the trombonist once said, I'll let that slide." LB: "You might be amused that the French word for 'paper clip' is 'trombone'." (26 June 2001, Bangor, Maine)

Cort�ge in A Minor – RB: "Have you ever been hard at work on some music, and the piece develops completely differently than you had expected? After I began the 3rd movement Romanze of my Brass Quintet, this Cort�ge virtually composed itself." LB: "This piece is in sonata form. The Exposition presents a gloomy Theme I in A Minor, and a stately Theme II in E Minor and F Minor. The Development transforms the duplet-plus-triplet accompaniment of Theme I into a radiant quintuplet D Major theme, which is later inverted. The Recapitulation restates Theme I in A Minor, but Theme II in B Minor and C Minor. The Coda presents the quintuplet Development theme in a celestial A Major for a serene conclusion." RB: "Thank you for that riveting analysis. You forgot to mention the original and forceful personalities of the themes and their progressions, and that the entire work enjoys strong momentum. Something else which sets me apart from many other 21st Century composers is my enjoyment of good honest melodies. Even instrumental music should sing. Quasi sempre cantabile." LB: "The title Cort�ge seemed most appropriate. The Oxford English Dictionary defines 'Cort�ge' simply as 'a funeral procession'. However, Le Dictionnaire Fran�ais Larousse defines 'Cort�ge' as 'ensemble de personnes qui suivent quelqu'un, quelque chose ou d�filent sur la voie publique (group of persons who follow someone, something or march in a public route)', which is very different indeed. This piece represents both English and French definitions: Ma Cort�ge en La Mineur pour Quintette � Cuivres est une petite procession avec diverses humeurs: c'est fun�raire et majestique, pessimiste et optimiste, etc. Cependent dans la derni�re partie, une �sprit d'optimisme tranquille triomphe. Donc c'est une procession et une progression, de la tristesse � la joie. Pour ces raisons le nom fran�ais Cort�ge me semble juste." RB: "Pardon your French." (5 August 2001, Madison, Wisconsin)