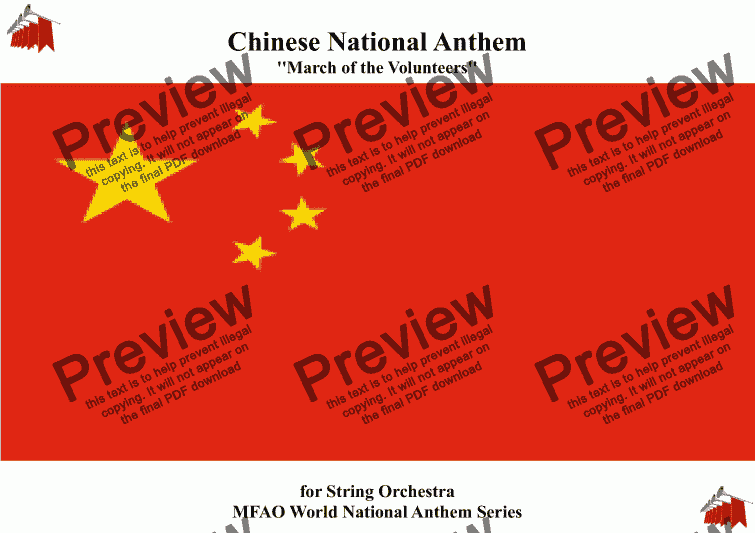 Composer
Nie Er (1912-1935)
Year of composition
1935
Arranger
Keith Terrett
Year of arrangement
2014
Publisher
Music for all Occasions
Difficulty
Easy (Grades 1-3)
Duration
1 minute
Genre
World music
License details
For anything not permitted by the above licence then you should contact the publisher first to obtain permission.

This song was written in 1935. On 27th September 1949, it was officially approved as the Chinese National Anthem. New words were adopted on the 5th of March 1978; but in 1982 the original words were restored.

The "March of the Volunteers" is the national anthem of the People's Republic of China, including its special administrative regions of Hong Kong and Macau. Unlike most previous Chinese anthems, it is written entirely in the vernacular, rather than in Classical Chinese.

Its lyrics were composed as a dramatic poem by the poet and playwright, the Japan-educated Tian Han in 1934 and set to music by Nie Er the next year for the movie Children of Troubled Times. It was adopted as the PRC's provisional anthem in 1949 in place of the Three Principles of the People of the Republic of China and the Communist "Internationale". When Tian Han was imprisoned during the Cultural Revolution in the 1960s, the march was briefly and unofficially replaced by "The East Is Red", then played without words, then played with altered words. Restored to its original version, the "March of the Volunteers" was raised to official status in 1982, adopted by Hong Kong and Macau upon their restorations to China in 1997 and 1999, respectively, and included in the Chinese Constitution's Article 136 in 2004. A 1939 bilingual songbook which included the song called it "a good example of… copy[ing] the good points from Western music without impairing or losing our own national color". Nie's piece is a march, a Western form, opening with a bugle call and a motif (with which it also closes) based on an ascending fourth interval from D to G inspired by "The Internationale". Its rhythmic patterns of triplets, accented downbeats, and syncopation and use (with the exception of one note, F# in the first verse) of the pentatonic scale, however, create an effect of becoming "progressively more Chinese in character" over the course of the tune. For reasons both musical and political, Nie came to be regarded as a model composer by Chinese musicians in the Maoist era. Howard Taubman, the New York Times music editor, initially panned the tune as telling us China's "fight is more momentous than her art" although, after US entrance into the war, he called its performance "delightful".