By: arr. Philip R Buttall
For: Quartet of Keyboards
This music is in your basket
View basket
Loading... 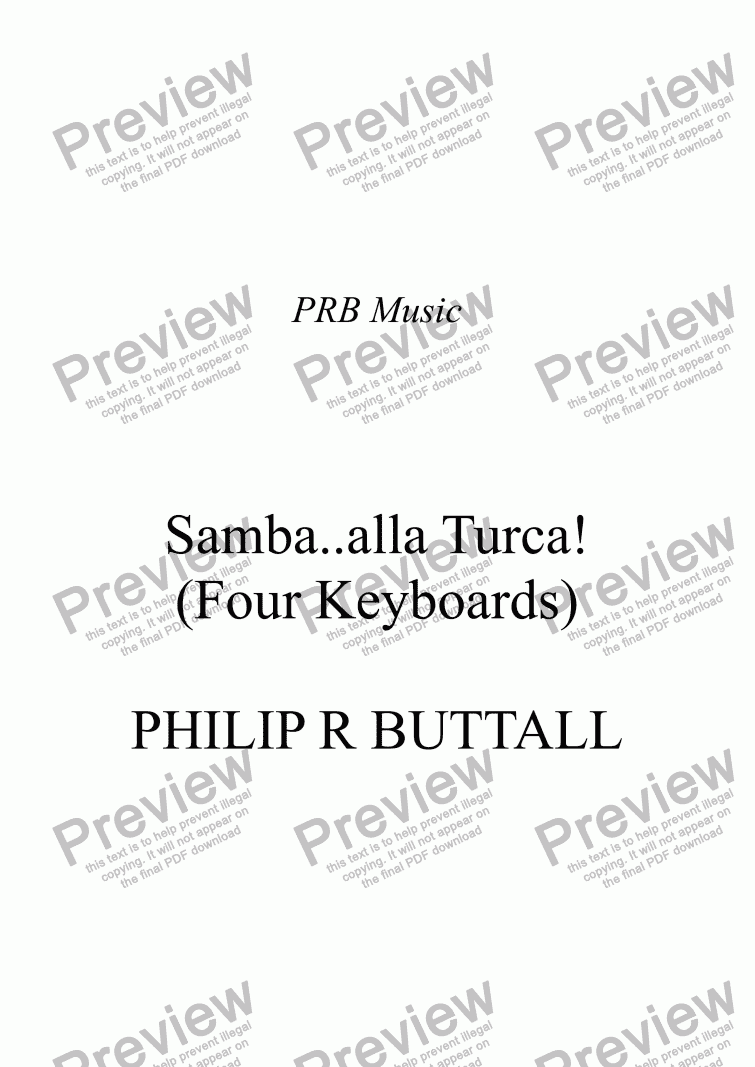 By: arr. Philip R Buttall
For: Quartet of Keyboards

Composer
arr. Philip R Buttall
Publisher
PRB Music
Difficulty
Difficult (Grades 7+)
Duration
3 minutes
Genre
Rock and Pop music
License details
For anything not permitted by the above licence then you should contact the publisher first to obtain permission.

A short while ago, I had an email from Lizzie Watts, who had come across my Samba..alla Turca! in its two-piano version, several years back. Lizzie said she was ’blown away’ by the piece, and played it a number of times, when it always had a great reception, she said..

Lizzie has recently been appointed Head Keyboard Tutor at the National Youth Music Camps in Wavendon, which is a week-long dedicated music camp. Lizzie goes on, "It is a truly inspiring place - some of the children we teach are outstandingly talented, and certainly give the tutors a run for our money! At the end of the week, we produce a show. This includes a theatrical performance, as well as a final performance by each instrumental group. I thought that your Samba Alla Turca would be a fantastic showpiece for the keyboards - with sombreros and top hats, of course!"

I checked through the various versions I had made of the piece, and was surprised to find that, unlike with The Lone Ar-ranger!, there wasn’t any keyboard arrangement, let alone what Lizzie was looking for - a version for eight youngsters on four different keyboards!

Having now made the ’Quartet’ version for Lizzie, I thought I’d add one for single keyboard, using autochords. I have added some of my ’extra’ melodies, which feature in all the other versions, but where there’s always more than one player to help out!

Lizzie has since added: "I would like to officially invite you to the final camp performance at The Stables in Wavendon, in the Stables Theatre, and it would be lovely to meet you if you can make it! Either way, I will be thrilled to perform a piece that has been one of my favourites for many years!"

Unfortunately I won’t be able to be there, but I certainly wish Lizzie, and her players all the very best on the day!

Lizzie has since got back in touch, to tell me how it all went: I’d just like to thank you once again for doing that arrangement for us - the other tutors were very jealous! I did, as promised, receive a class of very varied ability (from ’elementary’ to almost grade 8!) and the arrangement was wonderful - there were parts simple enough not to knock the less advanced players’ confidence, along with keyboard 2 which was considerably more difficult. One of the campers told me that he was really enjoying being challenged for once though, and that the piece was ’really cool’ which means a lot from a 14 year old! After only 4 hours of practice, I reckon we put on a pretty darn good performance (although we had to knock the final section off due to time limitations, which was a shame).

PS Lizzie’s the one in the sombrero!