Concerto for bassoon and string orchestra 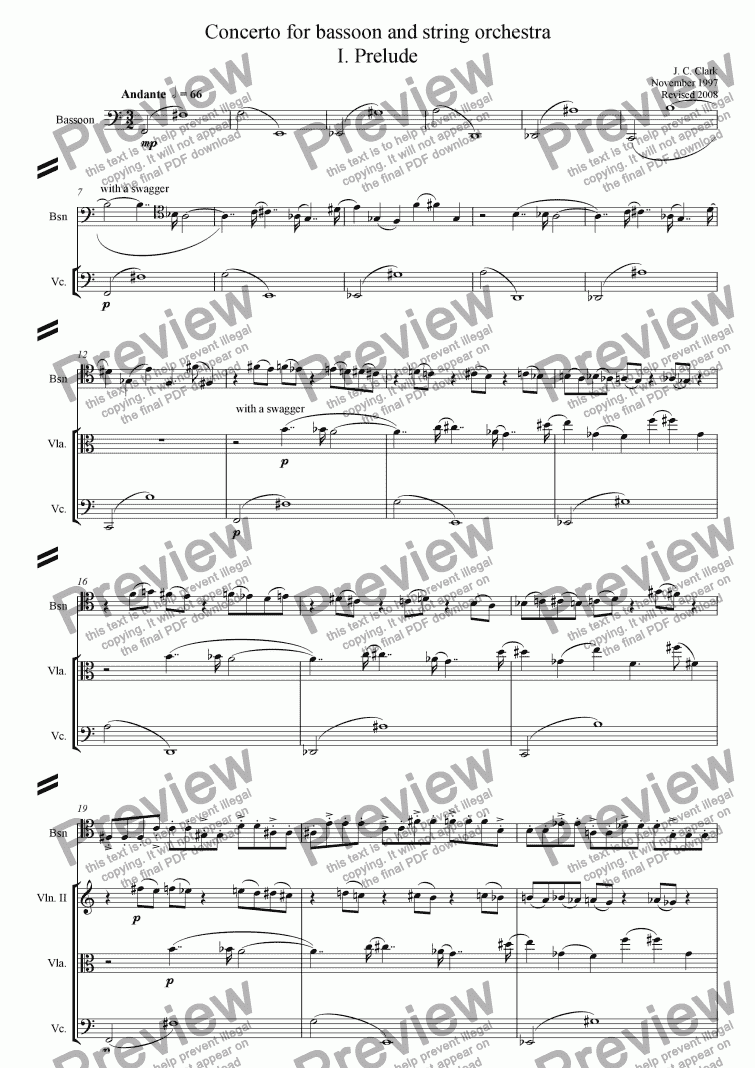 This work was first performed by Ian Glen with The Musicians of All Saints at The All Saints Centre, Lewes on 03/07/10

This work is part of a long term project to write a concerto for every instrument of the orchestra. The concerto was originally written in 1997 but when Ian said that he would perform it I got cold feet and started revising it heavily. The first movement was shortened, a slow movement was scrapped and a completely new last movement was composed. Ian was disappointed that the concerto had no slow movement so I composed a new one. Ian was then quite insistent that there should be a cadenza. This was added less that a month before this premier.

The first movement starts with ever increasing large intervals on the bassoon. The cellos then take up this idea while the bassoon presents a second idea (although actually related to the first). This is then in turn taken up by the violas while the bassoon presents a third idea. This process continues until five ideas (six if you count the pizzicato comments from the double basses) are presented simultaneously. The movement then quickly unwinds. This movement has effectively introduced the material that the rest of the Concerto is built on.

The second movement is a scherzo in ternary form. The third movement is the slow movement. It is a fugue for the Bassoon, solo violin and solo cello framed with hushed unfolding massed string chords. The fourth movement is a gigue which owes more than a little to the gigue from Bach’s cello suite No. 2. The fifth movement is also a fugue but this time using the full orchestra. The movement then unwinds giving way to the cadenza and a final reprise of the opening material. A brand new rhythmical figure on a seventh keeps interrupting the music finally bringing the work to its conclusion.

In order to submit this score to ScoreExchange.com Jonathan Clark has declared that they own the copyright to this work in its entirety or that they have been granted permission from the copyright holder to use their work. If you believe that this score should be not available here because it infringes your or someone elses copyright, please report this score using the copyright abuse form.

Reviews of Concerto for bassoon and string orchestra