By: Peter Warlock
For: String quartet
This music is in your basket
View basket
Loading... 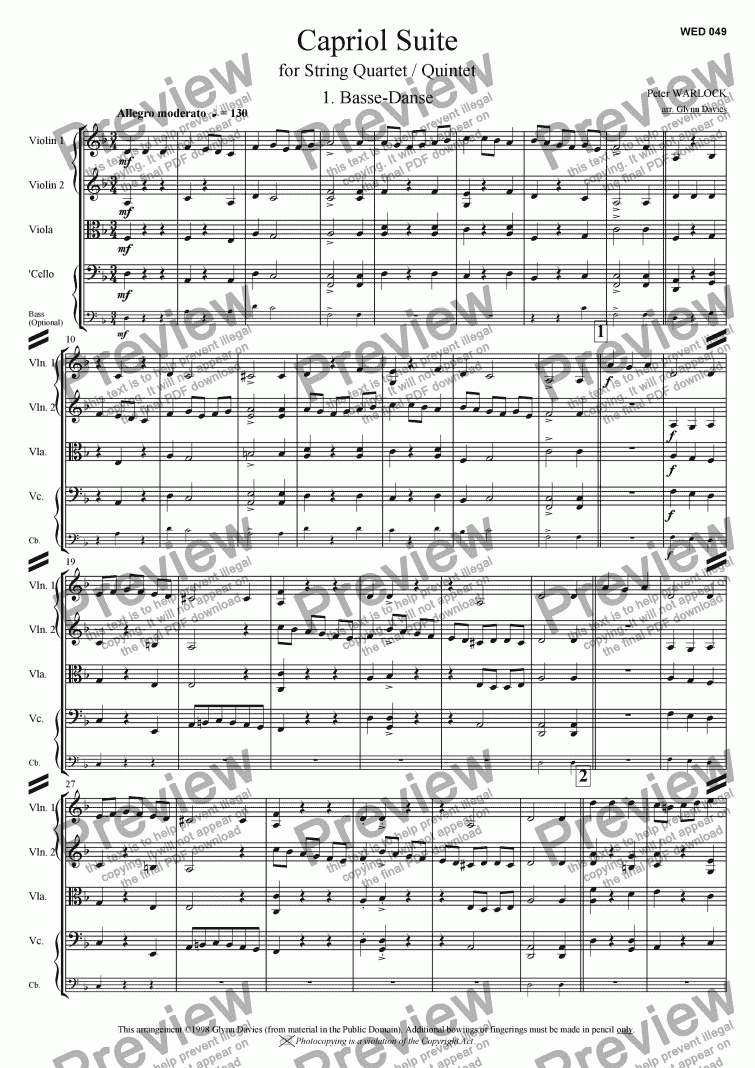 By: Peter Warlock
For: String quartet

Composer
Peter Warlock
Year of composition
1926
Arranger
Glynn Davies
Difficulty
Difficult (Grades 7+)
Duration
10 minutes
Genre
Modern classical music
License details
For anything not permitted by the above licence then you should contact the publisher first to obtain permission.

The Capriol Suite is quintessential Peter Warlock ? the pseudonym by which Philip Heseltine is known to all lovers of English song. Composed for string orchestra in 1926, five of its six movements are loosely based on ancient tunes drawn from Orch?sographie, a treatise on dance published in 1589 and ascribed to one Thoinot Arbeau, an anagrammatic pseudonym of French priest and savant J?han Tabourot (1519-1595). Arbeau is engaged in dialogue with Capriol, a lawyer who wishes to learn to dance; hence, the title. Critic and composer Cecil Gray noted that, "if one compares these tunes with what the composer has made of them it will be seen that to all intents and purposes it can be regarded as an original work." The charm of the Capriol Suite is its ineffable manner of summoning an aura of the archaic within a modern aural frame, so to speak ? that is, with the accelerated pace of contemporary urban life. The stately opening "Basse Danse" might almost be a transcription, while the following grave and gracious "Pavane," in fact, is an arrangement of Arbeau's four-part "Belle qui tiens ma vie." "Tordion" skips briskly into airy pizzicato nothingness, followed by the rustic "Bransle" ? brawl, in English ? becoming ever more spirited to end in a boisterous melee. The gently exquisite "Pieds-en-l'air" is pure Warlock, calling to mind the clutch of songs scattered throughout his oeuvre. For instance, "Chopcherry" or "Passing By" or "My Own Country," a pristine spring of feeling, undistorted by mockery, flows, though the cadence takes a syrupy Edwardian turn. The final vivacious "Mattachins" is a sword dance ending in a cross-rhythmic riot. The upshot of these cunningly distilled miniatures, playing together about ten minutes, is not only a drolly modern take on Elizabethan music but an unconscious self-portrait through which Heseltine is now glimpsed, the retiring scholar nursing a vein of urbane poetry, now the bibulous, roistering Warlock.

In this connection, Gray, the boon companion, keenest observer, and first biographer, said, "No account of Peter Warlock would be complete without reference to his harlequinesque propensity for suddenly indulging in extravagant displays of acrobatic dancing and pas seuls in all places and on all occasions, whenever he happened to be in a state of elation…the most vivid…recollection…that I retain was that of his departure one afternoon from Charing Cross Station…. On emerging from the booking-hall, instead of going straight to his train, he suddenly began to execute the most astonishing dance I have ever seen…worthy of Nijinsky himself…. Gradually the normal activities of the station came to a standstill…on the faces of the onlookers amusement quickly gave way to sheer astonishment, and astonishment to a kind of awestruck, spellbound admiration, as this strange, bearded, faun-like creature danced there all by himself…. Then, suddenly, the spell was broken. A whistle sounded, and Peter's train began slowly to move out of the station. With one final prodigious bound into the air he dashed to the barrier, brushed aside the protesting ticket-collector, clambered on to the footboard of the last carriage…and waved a courtly and dignified farewell to the assembled crowd…."

In 1928, the composer re-scored the Capriol Suite for full orchestra, augmenting the raucousness of the more extroverted numbers, though it is the deftly wrought original version for strings that is most often heard. Arrangements by others, for guitar quartet, winds, and even for a consort of recorders, are a tribute to its indelible charms and enduring appeal.

This arrangement is for standard string quartet, or quintet with the optional bass part.