By: Chinese folk (Jiangsu) song from the Qing dynasty
For: Orchestra
This music is in your basket
View basket
Loading... 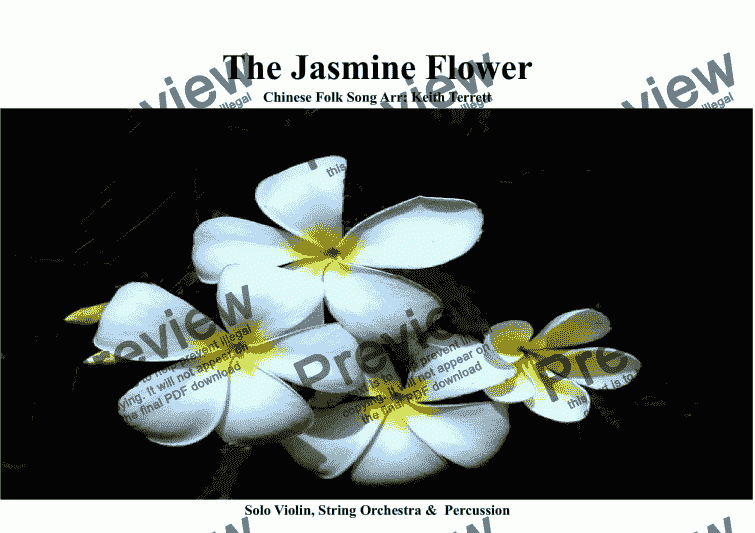 By: Chinese folk (Jiangsu) song from the Qing dynasty
For: Orchestra

Composer
Chinese folk (Jiangsu) song from the Qing dynasty
Arranger
Keith Terrett
Year of arrangement
2011
Publisher
Music for all Occasions
Difficulty
Moderate (Grades 4-6)
Duration
4 minutes
Genre
World music
License details
For anything not permitted by the above licence then you should contact the publisher first to obtain permission.

An arrangement of a classic Chinese song for solo Violin & String Orchestra.

It was created during the Qianlong Emperor period of the Qing Dynasty (18th century). There are several regional versions of the song, the more well known one from the Jiangsu Province, and the other from Zhejiang Province. They have different lyrics and a slightly different melody.

One version of the song describes a custom of giving Jasmine flowers, popular in the southern Yangtze delta region of China. Another, longer version describes the fear of plucking the flower. It has been played on ancient metal bells (bianzhong) and modern jade chimes. It uses the five note (pentatonic) scale developed in China and popular through Asia. The tune is one of xiaodiao ("short tunes"), popular in Chinese urban areas. In 1804 a British diplomat, John Barrow, noted that the tune seems to be the most popular song in China.

The song became the first Chinese folk song to become widely known outside China. In 1896 the song was used as temporary national anthem by the Qing Chinese officials in Europe. The melody has become well known among Western listeners as it was included by Giacomo Puccini in his opera Turandot (1926), where it is associated with ’Turandot’s splendor’. It appeared in a 1934 Hollywood movie The Good Earth (Based on a novel by Pearl Buck) It has been adapted by many artists around the world, for example by Kenny G. In 1982 the song found a place on a UNESCO list of recommended songs. When China regained sovereignty of Macau and Hong Kong, in 1999 and 1997, respectively, this music was played in the ceremonies. The song was said to be a the favorite of China’s former leader, Jiang Zemin (it was at his request that the song was played during the transfer ceremony in Hong Kong).The tune was played during Central Committee of the Communist Party of China meetings.

This song was sung partially unaccompanied by a young Chinese girl, and partially accompanied by the music by Peking University students (whose version has been described as infused with a techno beat) and broadcast to the world at the closing ceremonies of the 2004 Summer Olympics in Athens, Greece, to introduce the next Olympic Games site. An adaptation of the melody by Tan Dun and Wang Hesheng, chosen from more than 4,000 pieces, was played during the medal ceremonies at the Beijing 2008 Olympic Games. It was also performed at the 2010 Shanghai Expo opening ceremony by an orchestra with the pianist Lang Lang.

Zhao Dongming, head of Beijing Organizing Committee for the Olympic Games’ culture and ceremonies department, commented that "This piece of music reminds you of the gold medals for the Beijing Olympics, which are made of gold and jade". This piece of Tan Dun, an an Academy Award winning Chinese contemporary classical composer, cited by China Daily in 2008, described it as "glorious, heart warming and full of respect… an iconic piece… almost a cultural symbol of China" and "From Puccini to the Beijing Olympics, this melody is a gift from the Chinese people to the world’s athletes".

During the 2011 Chinese pro-democracy protests the song became associated with the Jasmine Revolution, as organisers instructed protesters to play Mo Li Hua on their cell phones as a form of anti government protest. Soon thereafter, video performances of Mo Li Hua and searches for the song’s name on the internet were censored by authorities, with some trouble because of the popularity of the song and its association with Chinese culture and history. At least one new version of the song, mentioning fear of arrests, has been developed by the activists as a response.

Reviews of Jasmine Flower (The) for Solo Violin & String Orchestra