A Soul in Transition

By: Malcolm Dedman
For: Large mixed ensemble
This music is in your basket
View basket
Loading... 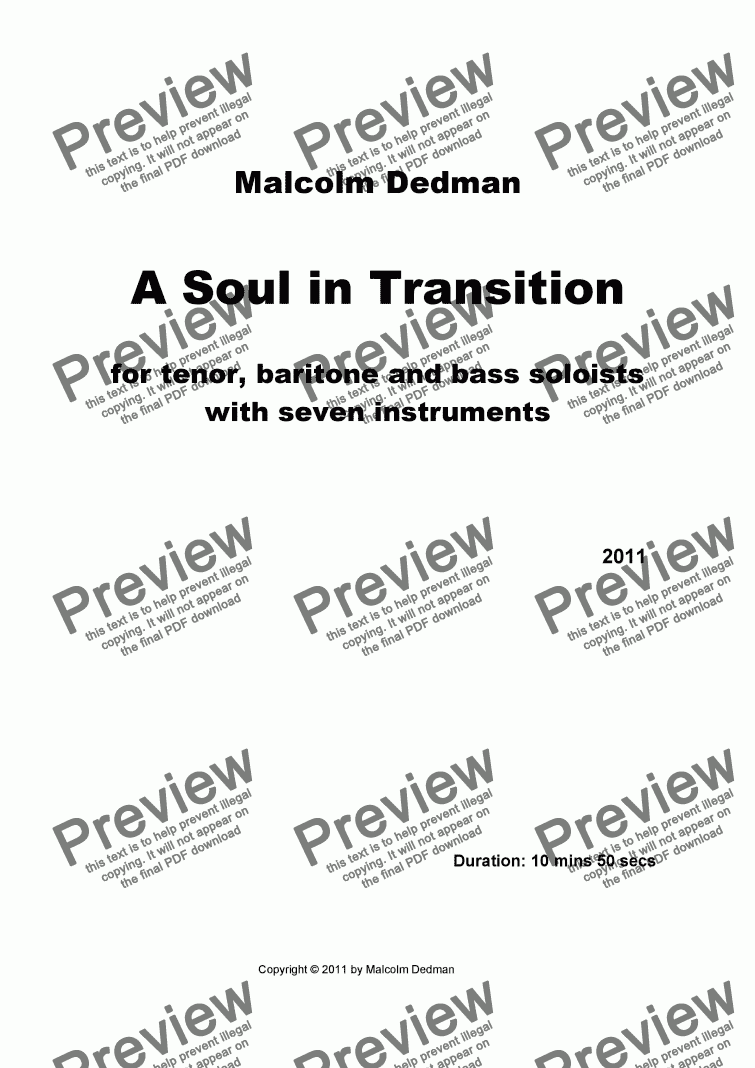 A Soul in Transition

This is an extended song for tenor, baritone and bass with an accompaniment of seven instruments (flute, clarinet, soprano saxophone, piano, percussion, violin and cello). It was written in 2011 and lasts around 11 minutes.

The words, written by myself, describe the process of a person dying as a result of a heart attack and the singers portray characters, as if in a mini opera. The baritone takes the role of the patient who has suffered the heart attack, the bass sings the role of the doctor treating him and the tenor is a messenger in the next life guiding the journey of the patient’s soul as he passes on. The purpose of this piece is to reassure the listener that death need not be a frightening experience.

The work is broadly in three sections, the first opening with the patient in severe pain, described by the instruments. The saxophone plays single notes representing a heart monitor, which develops into a sustained note once the heart stops beating. The baritone describes the feeling of floating like he is in a dream, when the doctor shocks him back to life. The music of pain returns, with the heart monitor, while the patient sings of how much pain he is in. At the same time, the doctor delights in having brought the patient back to life. Once again the heart monitor stops to the relief of the patient; the doctor declares time of death. The patient tries to reply that he is not dead, but the messenger then appears, saying that he cannot be heard by the doctor and that there is no need to fear anything that is happening.

The second section is more lyrical and opens with the messenger describing how the patient is progressing to a new life – there will be no more pain or suffering, and that he will guide the patient and help him to come to terms with what’s happening. Later, the patient sees his family weeping for him and he begs them not to weep as he is more alive than he has ever been.

The third section opens with the messenger saying that the patient will, in time, be able to help his family, as well as to help the world and all existence. The piece ends with a duet for tenor and baritone describing how wonderful and peaceful this new existence is for the patient.

Christmas Cantata - "The Word was Made Flesh" and Healing the Planet

Reviews of A Soul in Transition