Sign in / Register
HomeInstrumentationsString quartetString Quartet Op. 39, No. 4 A minor

By: Gerald Manning
For: String quartet
This music is in your basket
View basket
Loading... 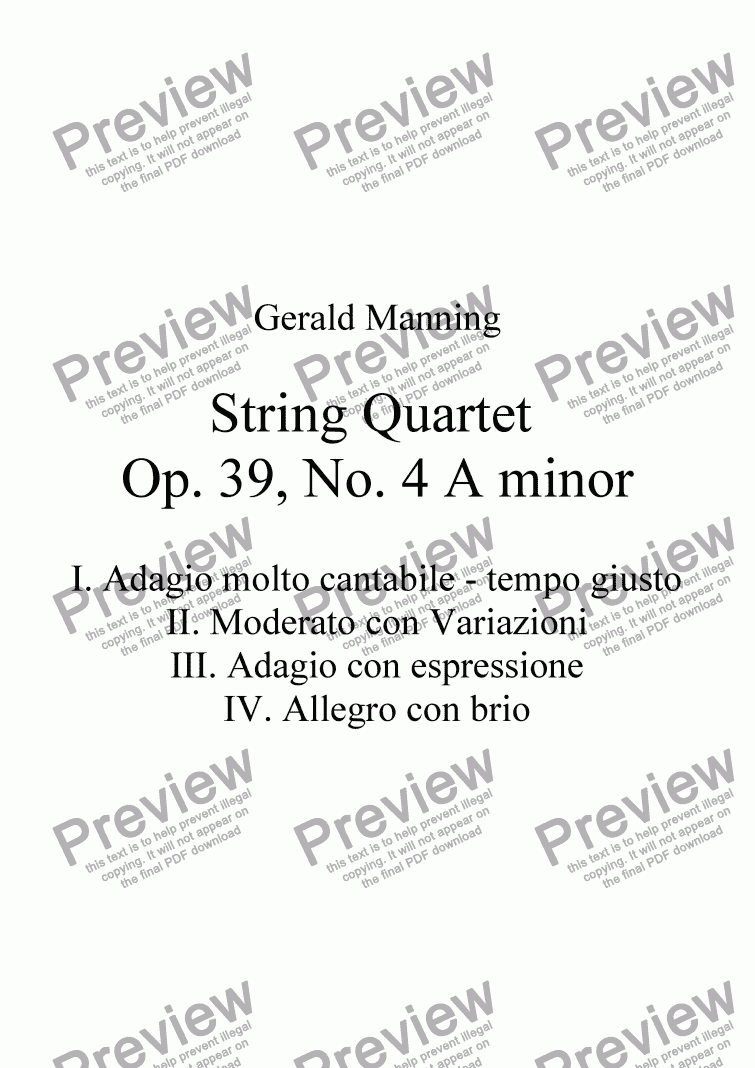 By: Gerald Manning
For: String quartet

Composer
Gerald Manning
Publisher
MANNING SCHOOL
Difficulty
Difficult (Grades 7+)
Duration
29 minutes
Genre
Classical music
License details
For anything not permitted by the above licence then you should contact the publisher first to obtain permission.

STRING QUARTET A MINOR By GERALD MANNING Op. 39, No. 4

Like the symphony in orchestral music, the string quartet in chamber music has come to be regarded as the highest form in which a composer expresses his thoughts. From the middle of the Seventeenth Century, it became customary to write either for orchestra or for a chamber group with the accompaniment of a keyboard instrument. The string quartet as we know it today-two violins, viola and violoncello- was entirely neglected. At the time of the stylistic transition from polyphony to homophony in the Eighteenth Century, a change gradually came about in the instrumentation of chamber music. Such composers as Boccherini, Karl Stamitz, Gossec, etc., began distinguishing between quartets which were to be played orchestrally, according to tradition, and those which were intended for solo instruments. An important intermediate step was the Divertimento for solo instruments, so favoured by the Viennese during the latter part of the Eighteenth Century. The development of sonata form is evident in the successive quartets of Haydn, Mozart and Beethoven. The string quartet arose to prominence with the work of Joseph Haydn, who discovered the string quartet genre essentially by accident when he was employed by Baron Carl von Joseph Edler von Fűrnberg in about 1755-57 at his country estate in Weinzieri, some fifty miles from Vienna. The Baron wanted to hear music, and the available players happened to be two violinists, a violist, and a cellist. Haydn’s early biographer Georg August Griesinger annotates the facts in this way:

The following purely chance circumstance had led him to try his luck at the composition of quartets. A Baron Fűrnberg had a place in Weinzieri, several stages from Vienna, and he invited from time to time his pastor, his manager, Haydn, and Albrechtsberger (a brother of the celebrated contrapuntist Albrechtsberger) to have a little music. Fűrnberg requested Haydn to compose something that could be performed by these four amateurs. Haydn then eighteen years old, took up this proposal, and so originated his first quartet which, immediately it appeared, received such general approval that Haydn took courage to work further in this form.

Ever since Haydn’s day the string quartet has been prestigious and considered a true test of the composer’s art. This may be partly because the palette of sound is more restricted than with orchestral music, forcing the music to stand more on its own rather than relying on tonal color; or from the inherently contrapuntal tendency in music written for four equal instruments.