By: Gabriel Faur�
For: String quartet
This music is in your basket
View basket
Loading... 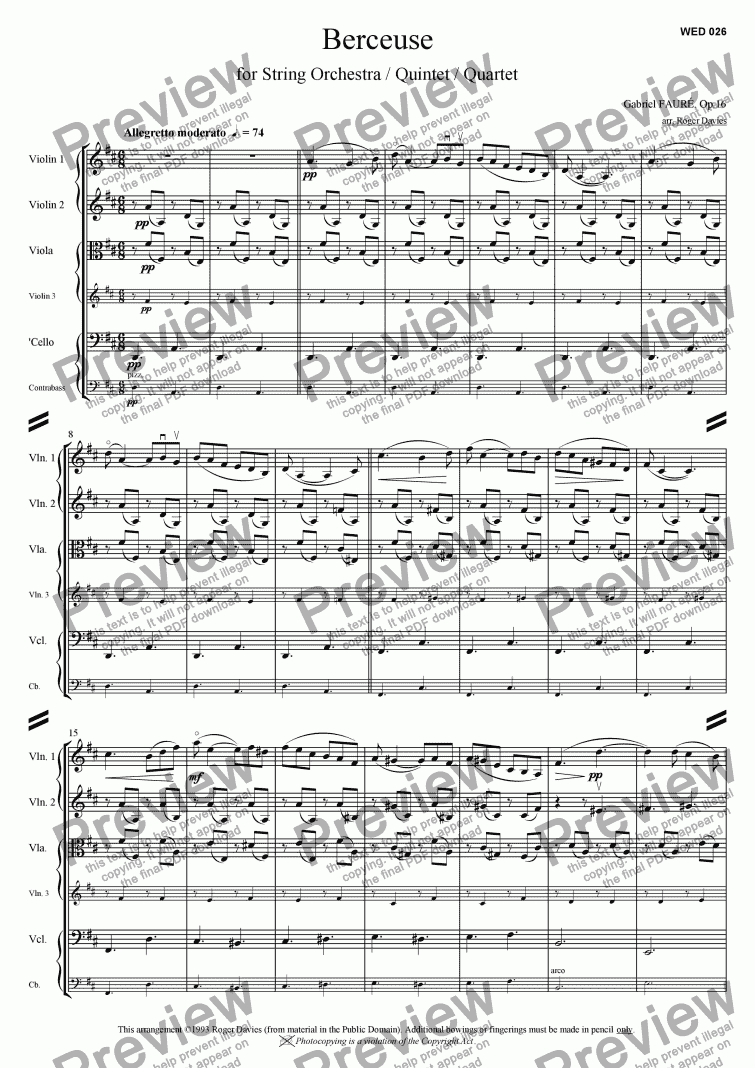 By: Gabriel Faur�
For: String quartet

Composer
Gabriel Faur�
Year of composition
1879
Arranger
Glynn Davies
Difficulty
Moderate (Grades 4-6)
Duration
3 minutes
Genre
Classical music
License details
For anything not permitted by the above licence then you should contact the publisher first to obtain permission.

In addition to his two fine sonatas for violin and piano, which stand among the most important French examples of the genre, Gabriel Faur? also composed a number of smaller scale works for this instrumental combination. Faur?'s first violin sonata, in A major, Op.13, which was written in 1875, seems to reflect the composer's skill and natural sensitivity as a creator of vocal music; and it is this same facility at "vocalizing" an instrumental line which distinguishes Faur?'s best-known single movement work for the piano and violin combination, the Berceuse in D major, Op.16.

The work dates from 1879, four years after the completion of the First Violin Sonata. It takes the form of a single movement, often highly concentrated in mood, but nevertheless somewhat limited in emotional range and of little more than three and a half minutes overall duration. The work was first performed in Paris, at one of the concerts promoted by the influential Soci?t? Nationale de la Musique, on February 14, 1880. The composer himself played the piano accompaniment for the violinist Ovide Musin, one of Faur?'s most enthusiastic and committed champions.

Ovide Musin also premiered the alternative version of the work, in its arrangement for violin and orchestra, at a further concert held in Paris two months later. As Keith Anderson has written, "The Berceuse proved widely popular, something that was not entirely to Faur?'s advantage, since its appearance in salon and even cafe repertoire might have been seen to detract from rather than add to his reputation."

This arrangement features a supplemental third violin part and an additional bass part for use with string orchestra.