By: Michele Novaro(1822-85) Arr:Keith Terrett
For: String orchestra
This music is in your basket
View basket
Loading... 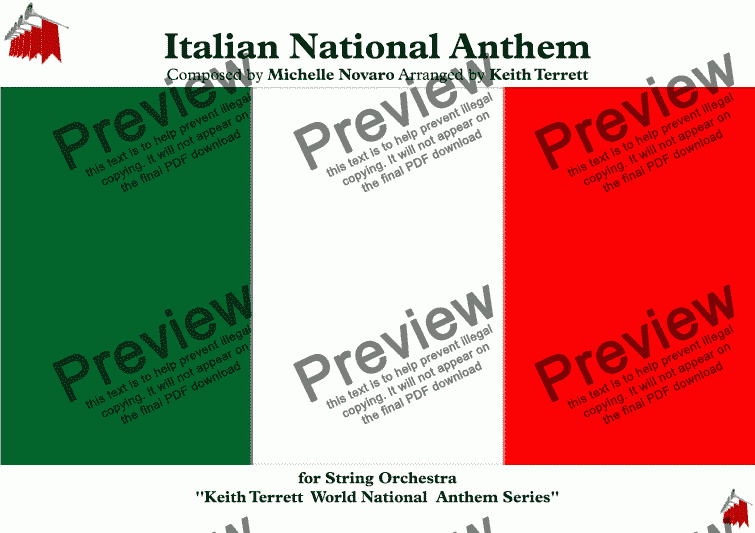 Composer
Michele Novaro(1822-85) Arr:Keith Terrett
Arranger
Keith Terrett
Publisher
Music for all Occasions
Difficulty
Easy (Grades 1-3)
Duration
1 minute
Genre
World music
License details
For anything not permitted by the above licence then you should contact the publisher first to obtain permission.

The first manuscript of the poem, preserved at the Istituto Mazziniano in Genoa, appears in a personal copybook of the poet, where he collected notes, thoughts and other writings. Of uncertain dating, the manuscript reveals anxiety and inspiration at the same time. The poet begins with È sorta dal feretro (It’s risen from the bier) then seems to change his mind: leaves some room, begins a new paragraph and writes "Evviva l’Italia, l’Italia s’è desta" (Hurray Italy, Italy has awakened). The handwriting appears nervy and frenetic, with numerous spelling errors, among which are "Ilia" for "Italia" and "Ballilla" for "Balilla".

The last strophe is deleted by the author, to the point of being barely readable. It was dedicated to Italian women:

The second manuscript is the copy that Mameli sent to Novaro for setting to music. It shows a much steadier handwriting, fixes misspellings, and has a significant modification: the incipit is "Fratelli d’Italia". This copy is in the Museo del Risorgimento in Turin.

The hymn was also printed on leaflets in Genoa, by the printing office Casamara. The Istituto Mazziniano has a copy of these, with hand annotations by Mameli himself. This sheet, subsequent to the two manuscripts, lacks the last strophe ("Son giunchi che piegano…") for fear of censorship. These leaflets were to be distributed on the December 10 demonstration, in Genoa.

December 10, 1847 was an historical day for Italy: the demonstration was officially dedicated to the 101st anniversary of the popular rebellion which led to the expulsion of the Austrian powers from the city; in fact it was an excuse to protest against foreign occupations in Italy and induce Carlo Alberto to embrace the Italian cause of liberty. In this occasion the tricolor flag was shown and Mameli’s hymn was publicly sung for the first time.

After December 10 the hymn spread all over the Italian peninsula, brought by the same patriots that participated to the Genoa demonstration.

Different versions exist as to how of how Goffredo Mameli, a young poet, came to write the anthem in 1847. One reports that Mameli took the anthem to the musician Michele Novaro, a friend, who lived in Turin. Novaro composed the music, and Mameli returned to Genoa where he presented words and music to his friends. Shortly thereafter, “Fratelli D’Italia” (Brothers of Italy, another common name for the anthem) was played for the first time, at a popular assembly. The tune gained popularity throughout the peninsula, in defiance of the Austrian, Bourbon and Papal police.

The other and equally persuasive story goes that one evening in 1847, in the house of the American consul, the center of discussion was the uprisings of the day. Urged by many of the consul’s guests, Mameli improvised a few lines on the spot and later wrote the rest. A few days later a friend took the poem to Turin and read it aloud at a nobleman’s party. The composer Michele Novaro who was a guest at the same party, tried a few notes on the piano and then, went home to compose the song. The anthem was sung for the first time the next day by a group of political exiles in the Caffè della Lega Italiana of Turin.

There are slight differences between Mameli’s original poem and how the anthem is sung today. The song is usually sung with the first verse repeated twice then the chorus repeated twice. (If subsequent verses are sung, they are only sung once, this is how the lyrics are presented below). It is also customary to end with “Sì!” (Yes!), perhaps to match the last note of the song.

There is talk lately of replacing the anthem, firstly because the music is not up to the standards of Italian classical music tradition (ironically, some of Italy’s greatest composers have composed anthems in this tradition, which are used by Central and South American countries, giving birth to the term “Latin American epic anthem”), and also the lyrics refer to specific events that were familiar to the Italians of the time that the anthem was composed, but bear little to no resonance with today’s Italians. However, “Il Canto degli Italiani” is very recognizable in Italy and would be hard to replace.