Cello part for Frame 2/5 - "Splinters of a Shattered Space"

By: Igor Korneitchouk
For: Solo Violoncello + piano
This music is in your basket
View basket
Loading... 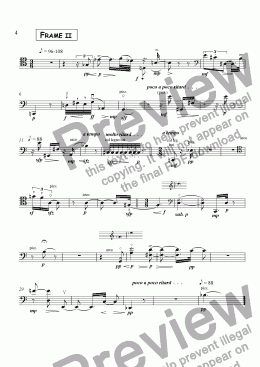 Cello part for Frame 2/5 - "Splinters of a Shattered Space"

Composer
Igor Korneitchouk
Year of composition
1980
Difficulty
Moderate (Grades 4-6)
Duration
1 minute
Genre
Classical music
License details
For anything not permitted by the above licence then you should contact the publisher first to obtain permission.

Click the mp3 button above for a live performance excerpt of the first and last movements.

Splinters of a Shattered Space: Five Frames for ’Cello and Piano are a set of separate "snapshots" of different "internal" landscapes, each frame highlighting a different subject – be it technique, sonority, style:

Frame I features a strummed piano "curtain raiser" followed by suggestive pitch constellations that at times suggest tonal nodes. After a variously colored meditation on one such node, a shared low C, the strummed gesture returns, and the frame ends with a druidic upward procession of the cello, quietly ratified by the piano. The instruments become dancers in Frame II, alternately capering with graceful yet athletic figures. In Frame III they behave more like singers, letting the colors of long tones gently bleed into one another until the cello turns away with an expiring sigh. The piano then falls silent in Frame IV, leaving the cello to mumble, declaim, whisper, and grunt its way through a multifarious cadenza that is now antic, now manic, finally mantic: its last gasps quietly prophesy the opening of the concluding frame. Frame V releases the gathering energies of its predecessors with a foot-stomping obsession that never lets up. About two-thirds of the way through, a slow rising line starts low in the piano and is taken over by the cello, like a big slow bubble rising from the bottom of a huge cauldron-when it pops, the piece is done.

A recording of this piece is available on CD from the Centaur label and on Amazon.

Sorry, there's no reviews of this score yet. Please .
In order to submit this score to ScoreExchange.com Igor Korneitchouk has declared that they own the copyright to this work in its entirety or that they have been granted permission from the copyright holder to use their work. If you believe that this score should be not available here because it infringes your or someone elses copyright, please report this score using the copyright abuse form.