An arrangement of the Australian National Anthem Advance Australia far for Clarinet Quintet.

The original song Advance Australia Fair was composed by Peter Dodds McCormick under the pen-name ’Amicus’ (which means ’friend’ in Latin), in the late 19th century, and first performed by Andrew Fairfax at a Highland Society function in Sydney on 30 November 1878. The song quickly gained popularity and an amended version was sung by a choir of 10,000 at the inauguration of the Commonwealth of Australia on 1 January 1901. In 1907 the Australian Government awarded McCormick £100 for his composition.

In a letter to R. B. Fuller Esq., dated 1 August 1913, McCormick described the circumstances that inspired him to write Advance Australia Fair:

Before its adoption as Australia’s national anthem, Advance Australia Fair saw considerable use elsewhere. For example, Australia’s national broadcaster, the Australian Broadcasting Commission, used it to announce its news bulletins until 1952. It was also frequently played at the start or end of official functions. Towards the end of World War II, it was played in picture theatres after "God Save the Queen" and the American national anthem. 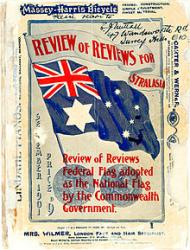