By: Don Lawrence
For: Concert band / wind band
This music is in your basket
View basket
Loading... 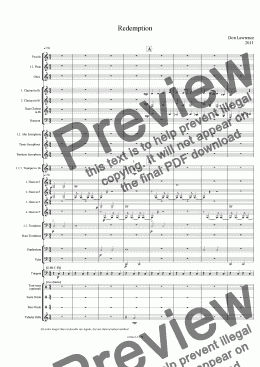 Composer
Don Lawrence
Year of composition
2011
Difficulty
Moderate (Grades 4-6)
Duration
4 minutes
Genre
Classical music
License details
For anything not permitted by the above licence then you should contact the publisher first to obtain permission.

The original concept for this piece was that the groups of instruments in the band each had their own mood. All the moods were negative, except for the trumpet-chimes group’s interjections. I didn’t know, originally, which mood would triumph. You can probably guess, from the title of the piece, who did eventually win.

It’s entertaining to compare the list I made before writing any music, to what actually ended up happening. The groups that did what I thought they would do are the clarinet-bassoons (“sad”), saxophones (“sarcastic”), and trumpet-chimes (“hopeful”); and “eternal,” for low brass and timpani, was probably a polite way of describing accompaniment, and that is what they end up doing most of the time. The trombones do begin the “angry” middle section, but they soon retire into accompaniment, and their angry role is taken over by the high woodwinds, which were supposed to be the “shriek” group. The snare and bass drum aren’t particularly “violent”, though they do play only during the angry section. The horns were supposed to have “no emotion”, and be used to signal transitions (a traditional use of orchestral horns). Instead, the horns mainly play accompaniment, and the transitions are always introduced by the trumpet-chimes group.

Every group’s mood is expressed by a melody that begins with do-do-re-me, in various keys and tempos. Most of the rest of the material in the piece comes from subsets and mirror images of those four notes. Challenge: What famous sarcastic melody from American history did I steal for the saxophone theme? It’s hidden by modulations, and by giving different pieces of the melody to different saxes, but it might still be recognizable! A prettier version of it happens near the end, after the trumpet-chimes have reformed everyone.

Sorry, there's no reviews of this score yet. Please .
In order to submit this score to ScoreExchange.com Don Lawrence has declared that they own the copyright to this work in its entirety or that they have been granted permission from the copyright holder to use their work. If you believe that this score should be not available here because it infringes your or someone elses copyright, please report this score using the copyright abuse form.